Binary Subtractor is another type of combinational arithmetic circuit that is used to subtract two binary numbers from each other, for example, X – Y to find the resulting difference between the two numbers.

Unlike the Binary Adder which produces a SUM and a CARRY bit when two binary numbers are added together, the binary Subtractor produces a DIFFERENCE, D by using a BORROW bit, B from the previous column. The operation of subtraction is the opposite to that of addition.

A Half Subtractor Circuit

A half subtractor is a logical circuit that performs a subtraction operation on two binary digits. The half subtractor produces a difference and a borrow bit for the next stage.

The block diagram of a half Subtractor is shown below in fig.1.  The symbol and truth table are shown in fig.2.

The Boolean expression for a half subtractor is as follows:

For the DIFFERENCE bit:

For the BORROW bit:

The main difference between the Full Subtractor and the previous Half Subtractor circuit is that a full subtractor has three inputs.

The two single bit data inputs X (minuend) and Y (subtrahend) the same as before plus an additional Borrow-in (BIN)  input to receive the borrow generated by the subtraction process from a previous stage as shown below.

The combinational circuit of a full subtractor performs the operation of subtraction on three binary bits producing outputs for the difference D and borrow BOUT .

The truth table for the full subtractor is given below: 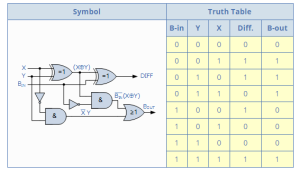 Hence the Boolean expression for a full subtractor is as follows:

For the DIFFERENCE (D) bit:

For the BORROW OUT (Bout) bit:

As with the binary adder, we can also have n number of 1-bit full subtractors connected or “cascaded” together to subtract two parallel n-bit numbers from each other.

So by using an n-bit adder and n number of inverters (NOT Gates), the process of subtraction becomes an addition as we can use two’s complement notation on all the bits in the subtrahend and setting the carry input of the least significant bit to a logic “1” (HIGH). 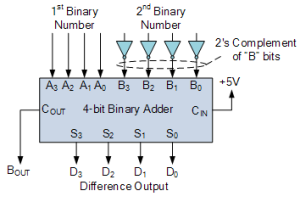