Fig.1 shows the basic block diagram of  a Digital Communication System. In this figure the different functional elements are represented  by blocks. 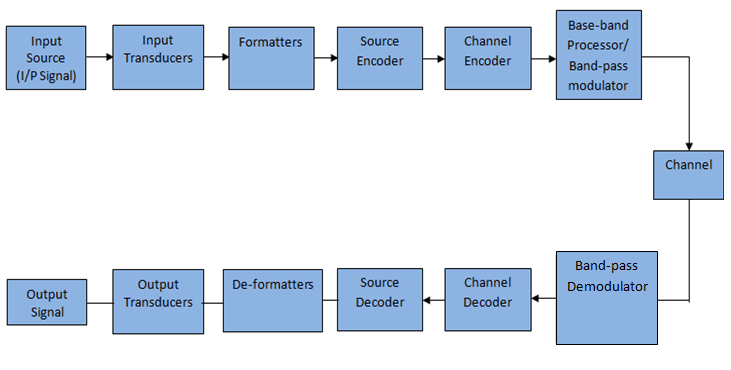 Now, we shall discuss the functioning of these blocks.

The input source or the source of information are generally analog in nature for example voice signal and video signal.

These signals are non-electrical quantities and hence can not be processed directly in a digital communication system.

A transducer is a device which converts one form of energy into another form.

A formatter is used to convert an analog signal into a digital signal. So the received signal from the transducer is converted into digital signal by using the formatter.

However, if the source signal is already in digital form such as computer then we will not need a formatter in such cases.

The source encoder is used to compress the data into minimum number of bits. This helps in effective utilization of the bandwidth. It removes the redundant bits or unnecessary excess bits that is zeros from the input data.

The channel encoder, does the coding for error correction.

During the transmission of the signal, due to the noise in the channel, the signal may get altered. Hence, the channel encoder provides some redundant bits to the message data in order to provide an error free data on the receiver side.

The channel encoder plays an important role in the communication system.

In case of low speed wireless transmission, the base band signal can be transmitted directly.

But when the data has to travel  in a noisy atmosphere, we have to employ some features such as pulse shaping, line coding. This task is performed by Base-band processor.

Now, for high speed transmission, the digital data is modulated with the help of a high frequency carrier just like in case of analog transmission. This task is performed by the base-band modulator.

The communication channel is the media via which the signal is transmitted from the transmitting end to the receiving end. It is the part of model at which maximum noise is added to the signal.

The base-band decoder is used to recover the original data from the pulse shaped or line coded data.

The channel decoder, after detecting the sequence, does some error corrections.

During the transmission, the signal might get distorted. This is corrected by adding some redundant bits to the signal. This addition of bits helps in the complete recovery of the original signal.

The resultant signal is once again digitized by sampling and quantizing so that the pure digital output is obtained without the loss of information. The source decoder recreates the source output.

The deformatter converts the digital data into analog signal.

This is the output which is produced after the whole process.