Combinational logic circuits or gates are the basic building blocks of all digital systems.

These circuits or gates  perform Boolean operations on multiple input variables and determine the outputs as Boolean functions of the inputs.

We will discuss simple circuit configurations such as two-input NAND and NOR gates and then expand our analysis to more general cases of multiple-input circuit structures.

In its most general form, a combinational logic circuit, or gate, performing a Boolean function can be represented as a multiple-input, single-output system, as shown in the figure below. 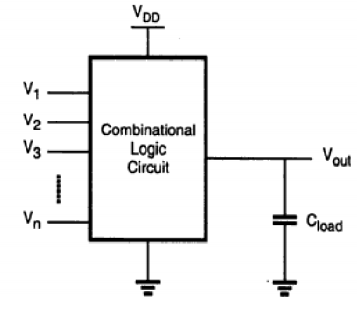 The output node is loaded with a capacitance Cload, which represents the combined capacitances of the parasitic device in the circuit.

In static CMOS circuit style,  each gate output is connected to either VDD or VSS via a low-resistance path,at every point in time (except during the switching transients),

Also, the outputs of the gates assume at all times the value of the Boolean function implemented by the circuit (ignoring, once again, the transient effects during switching periods).

Whereas in dynamic circuit class, that relies on temporary storage of signal values on the capacitance of high-impedance circuit nodes.

The dynamic approach has the advantage that the resulting gate is simpler and faster. On the other hand, its design and operation are more involved than those of its static counterpart, due to an increased sensitivity to noise.

A static CMOS gate is a combination of two networks, called the pull-up network (PUN) and the pull-down network (PDN) as shown in figure below.

Figure 2: Complementary logic gate as a combination of a PUN (pull-up network) and a PDN (pull-down network).

The figure shows a generic N input logic gate where all inputs are distributed to both the pull-up and pull-down networks.

The function of the PUN is to provide a connection between the output and VDD anytime the output of the logic gate is meant to be 1 (based on the inputs).

Similarly, the function of the PDN is to connect the output to VSS when the output of the logic gate is meant to be 0.

The PUN and PDN networks are constructed in a mutually exclusive fashion such that one and only one of the networks is conducting in steady state.

In constructing the PDN and PUN networks, the following observations should be kept in mind: 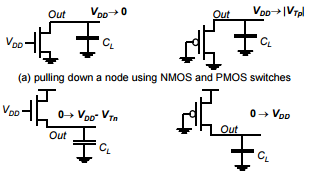 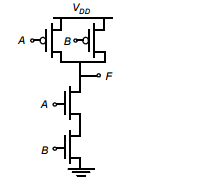 The PDN network consists of two NMOS devices in series that conduct when both A and B are high.

The PUN is the dual network, and consists of two parallel PMOS transistors.

The truth table for the simple two input NAND gate is given in Table 1.

It can be verified that the output F is always connected to either VDD or GND, but never to both at the same time.