Digital Comparator is another common and very useful combinational logic circuit. Digital or Binary Comparators are made up from standard AND, NOR and NOT gates that compare the digital signals present at their input terminals and produce an output depending upon the condition of those inputs.

Digital comparators are required to compare  the binary numbers and determine whether the value of input A is greater than, smaller than or equal to the value at input B etc.

The digital comparator accomplishes this using several logic gates that operate on the principles of Boolean Algebra. There are two main types of Digital Comparator available and these are.

The purpose of a Digital Comparator is to compare a set of variables or unknown numbers, for example A (A1, A2, A3, …. An, etc) against that of a constant or unknown value such as B (B1, B2, B3, …. Bn, etc) and produce an output condition or flag depending upon the result of the comparison.

For example, a magnitude comparator of two 1-bits, (Aand B) inputs would produce the following three output conditions when compared to each other.

This is useful if we want to compare two variables and want to produce an output when any of the above three conditions are achieved.

Let’s take an example of producing an output from a counter when a certain count number is reached.

Consider the simple 1-bit comparator below:

The operation of a 1-bit digital comparator is given in the following Truth Table. 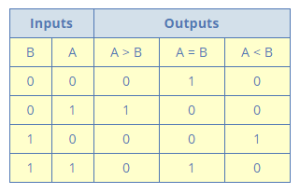 Two distinct features about the comparator can be noticed from the above truth table.

Secondly, the output condition for A = B resembles that of a commonly available logic gate, the Exclusive-NOR or Ex-NOR function (equivalence) on each of the n-bits giving:

Digital comparators actually use Exclusive-NOR gates within their design for comparing their respective pairs of bits.

As well as comparing individual bits, we can design larger bit comparators by cascading together n of these and produce a n-bit comparator.

Multi-bit comparators can be constructed to compare whole binary or BCD words to produce an output if one word is larger, equal to or less than the other.

A very good example of multi-bit comparator is the 4-bit Magnitude Comparator. 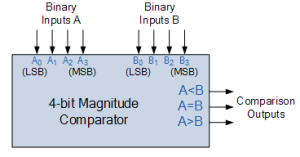 These cascading inputs are connected directly to the corresponding outputs of the previous comparator as shown to compare 8, 16 or even 32-bit words. 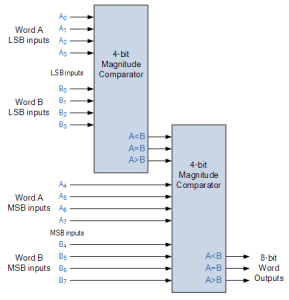 When comparing large binary or BCD numbers like the example above, to save time the comparator starts by comparing the highest-order bit (MSB) first. If equality exists, A = B then it compares the next lowest bit and so on until it reaches the lowest-order bit, (LSB). If equality still exists then the two numbers are defined as being equal.

If inequality is found, either A > B or A < B the relationship between the two numbers is determined and the comparison between any additional lower order bits stops.