Digital Line Coding is a special coding system used for the transmission of digital signal over a transmission line.

It is the process of converting binary data to a digital signal.

The data, text,numbers, graphical images, audio and video which are stored in computer memory are in the form of binary data or sequence of bits. Line coding converts these sequences into digital signal.

There are 3 types of Line Coding

The Unipolar signaling is also known as On-Off Keying or simply OOK.

There are two common variations in Unipolar signaling :

In this type of unipolar signaling, a High (1)in data is represented by a positive pulse called as Mark, which has a duration T0 equal to the symbol bit duration. A Low(0) in data input has no pulse.

The advantages of Unipolar NRZ are −

The disadvantages of Unipolar NRZ are −

There are two methods of Polar Signaling. Such as:

This is shown in fig.4 below. 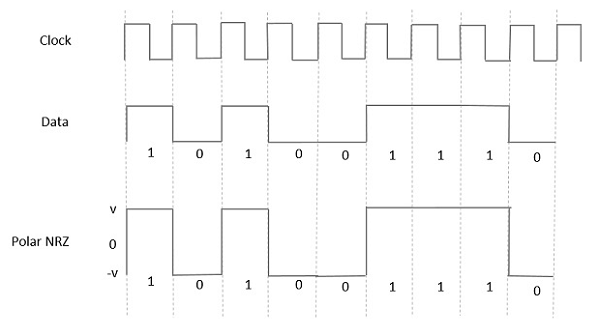 The advantages of Polar NRZ are −

The disadvantages of Polar NRZ are −

However, for a Low (0) input, a negative pulse represents the data, and the zero level remains same for the other half of the bit duration.

This is shown in fig.5 below . 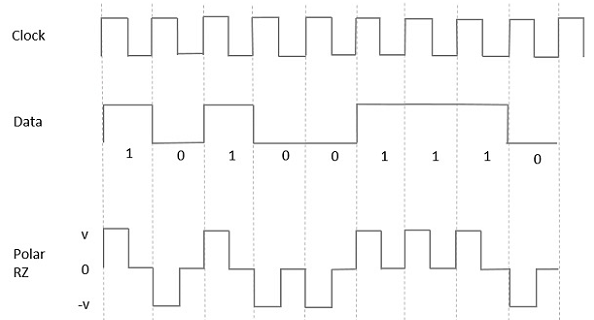 The advantages of Polar RZ are −

The disadvantages of Polar RZ are −

This is an encoding technique which has three voltage levels such as : +, – and 0. Such a signal is known as duo-binary signal.

An example of this type is Alternate Mark Inversion (AMI).

For a 1, the voltage level gets a transition from + to – or from – to +, having alternate 1s to be of equal polarity. A 0 will have a zero voltage level.

There are  two types in this method. such as :

As  we have already discussed the difference between NRZ and RZ, the same way here too.

The following figure clearly describes this. 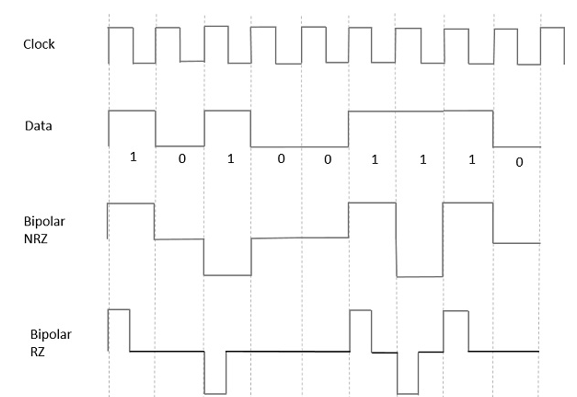 In the above fig.6, both the Bipolar NRZ and RZ waveforms are shown.

The function which shows how the power of a signal got distributed at various frequencies, in the frequency domain is known as Power Spectral Density (PSD).

PSD is the Fourier Transform of Auto-Correlation . It is in the form of a rectangular pulse.

According to the Einstein-Wiener-Khintchine theorem, if the auto correlation function or power spectral density of a random process is known, the other can be found exactly.

Hence, to derive the power spectral density, we shall use the time auto-correlation (Rx(τ)) of a power signal x(t) as shown below.

Since x(t) consists of impulses, (Rx(τ))  can be written as:

Getting to know that  Rn = R-n , for real signals, we have

Since the pulse filter has the spectrum of (ω)↔f(t), we have

Now we can find the PSD of various line codes using this equation for Power Spectral Density .