They are organized hierarchically in the figure shown below:

To understand how these three classes of servers interact, suppose a DNS client wants to determine the IP of the hostname ww.amazon.com. To a first approximation, the following events will take place:

In the internet there are 13 root DNS servers (labelled A through M), most of which are located in North America. 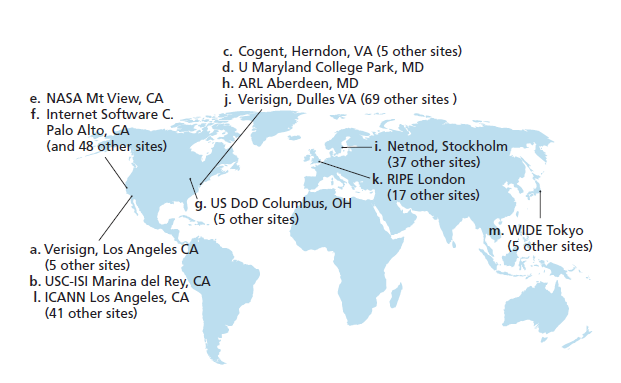 Although we have referred to each of the 13 DNS servers as if it were a single server, each “server” is actually a network of replicated servers, for both security and reliability purposes. All together, there are 247 root servers as of fall 2011. 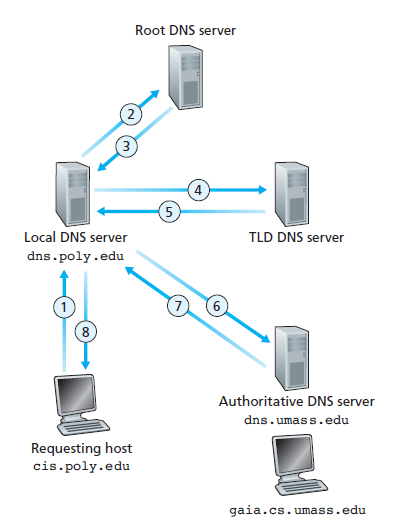 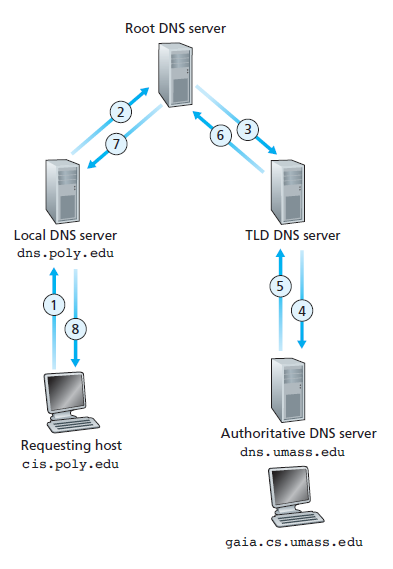 In practice, the queries typically follows the pattern in the figure above: The query from the requesting host to the local DNS server is recursive, and the remaining queries are iterative.

Our discussion thus far has ignored DNS caching , a critically important feature of the DNS system. In truth, DNS extensively exploits DNS caching in order to improve the delay performance and to reduce the number of DNS messages ricocheting around the internet. The idea behind DNS caching is very simple. In a query chain, when a DNS server receives a DNS reply (containing, for example, a mapping from a hostname to an IP address), it can cache the mapping in its local memory. For example, in figure 2.21, each time the local DNS server dns.poly.edu receives a reply from some DNS server, it can cache any of the information contained in the reply. If a hostname/IP address pair is cached in a DNS server and another query arrives to the DNS server for the same hostname, the DNS server can provide the desired IP address, even if it is not authoritative for the hostname. Because hosts and mappings between hostnames and IP addresses are by no means permanent, DNS servers discard cached information after a period of time (often set to two days).