Generation of AM Waves

The circuit that generates the AM waves is called as amplitude modulator and in this post we will discuss two such modulator circuits namely :

Both of these circuits use a non-linear elements such as a diode for their implementation . Both these modulators are low power modulator circuits . 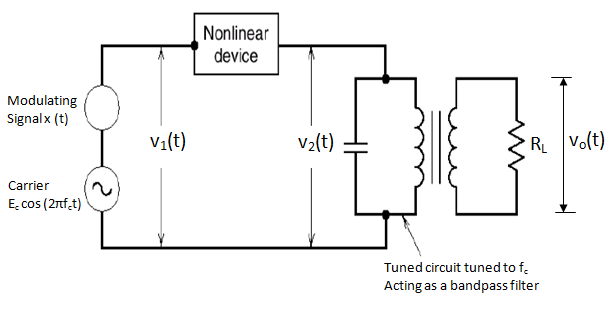 It consists of the following :

The modulating signal and carrier are connected in series with each other and their sum V1(t) is applied at the input of the non-linear device, such as diode, transistor etc.

The input output relation for non-linear device is as under :

where a and b are constants.

The five terms in the expression for V2(t) are as under :

The LC tuned circuit acts as a bandpass filter . Its frequency responce is shown in fig 2 which shows that the circuit is tuned to frequency  fc and its bandwidth is equal to 2fm . This bandpass filter eliminates the unuseful terms from the equation of v2(t) . 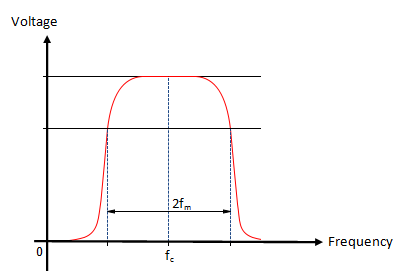 Hence the output voltage vo(t) contains only the useful terms .

Comparing this with the expression for standard AM wave i.e.

Hence, the square law modulator produces an AM wave . 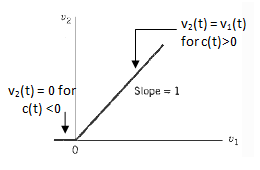 This diode is assumed to be operating as a switch .

The modulating signal x(t) and the sinusoidal carrier signal c(t) are connected in series with each other. Therefore, the input voltage to the diode is given by :

The amplitude of carrier is much larger than that of x(t) and c(t) decides the status of the diode (ON or OFF ) .

In other words , the load voltage v2(t) varies periodically between the values v1(t) and zero at the rate equal to carrier frequency fc .

We can express v2(t) mathematically as under :

Let us express gp(t) with the help of Fourier series as under :

Substituting gp(t) into equation (4), we get

The odd harmonics in this expression are unwanted, and therefore, are assumed to be eliminated .

Clubing the second and third terms together , we obtain

This is the required expression for the AM wave with m=[4/πEc] . The unwanted terms can be eliminated using a band-pass filter (BPF) .