NOT Gate or Inverter

The Not Gate (or inverter) performs a basic logic function called inversion or complementation. The purpose of the inverter is to change one logic level to the opposite level. In terms of bits, it changes a 1 to 0 and vice-versa.

This gate has only one input and one output. NOT gate is called the inverter because output state is always opposite to the input state, so when the input is low signal, output is high signal and vice-versa.

It is called NOT gate because the output state is always opposite to that of the input state. A transistor may be used as an inverter, as shown in fig 1. 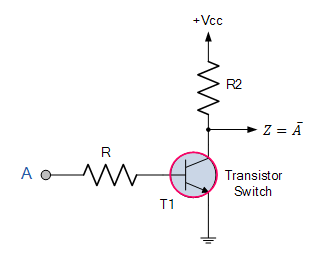 When the input signal to the base of transistor, is zero, base current of transistor is zero, as no current flows in collector circuit and the output voltage  remains equal to VCC i.e. 5V. On the other hand when the input signal is high, base current flows through the transistor resulting in flow of saturation current in collector circuit. Because of high collector current there will be large voltage drop across the collector resistance RC and so output Vout will be at low level.

Symbols used for representing inverters are shown in fig.2

The logic equation of the NOT gate is written as

Truth Table of NOT Gate

And is read as ‘Z equals NOT A’or ‘Z equals complement of A’. The truth table of a NOT gate is given in table 1

It contains the TTL hex inverter. It is a 14-pin dual-in-line package. Fig 3 depicts the pinout diagram of IC 7404. 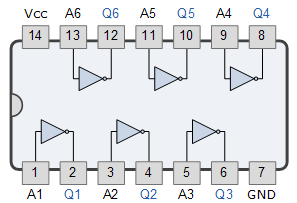 Fig 4 depicts the output of an inverter (or NOT gate) for a pulse input.