The inverter is truly the nucleus of all digital designs.

Once its operation and properties are clearly understood, designing more intricate structures such as NAND gates, adders, multipliers, and microprocessors is greatly simplified.

The analysis of inverters can be extended to explain the behavior of more complex gates such as NAND, NOR, or XOR, which in turn form the building blocks for modules such as multipliers and processors.

In this article, we will discuss the CMOS inverter. This is certainly the most popular at present and therefore deserves our special attention.

The logic symbol and truth table of ideal inverter is shown in figure given below.

Here A is the input and B is the inverted output. 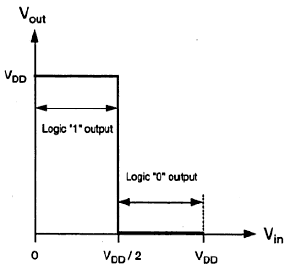 Vth is the inverter threshold voltage, which is equal to VDD /2, where VDD is the output voltage.

The output is switched from 0 to  VDD when input is less than Vth.

The generalized circuit  of an nMOS inverter is shown in the figure below. 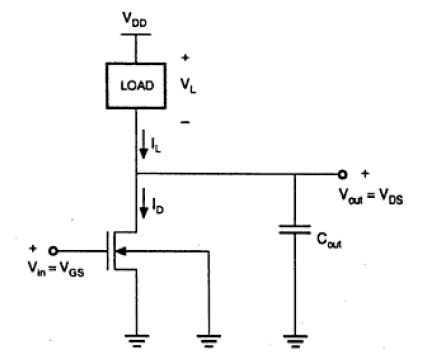 Generalized Circuit for an nMOS Inverter

The source to substrate voltage of nMOS is also called driver for transistor which is grounded; so VSS= 0.

The output node is connected with a lumped capacitance used for VTC (Voltage Transfer Characteristics).

The basic structure of a resistive load inverter is shown in the figure below. 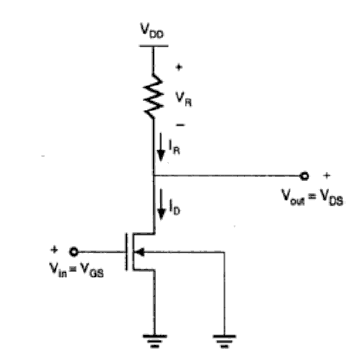 The load consists of a simple linear resistor RL.

The power supply of the circuit is VDD and the drain current ID is equal to the load current IR.

So, the voltage drop across the load resistor is ZERO and output voltage is equal to the VDD.

VTC of the resistive load inverter is shown below  indicating the operating mode of driver transistor and voltage points. 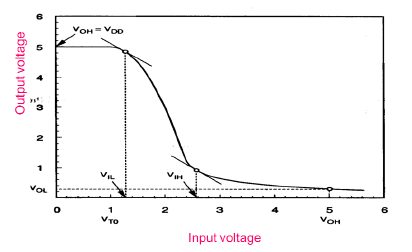 Two inverters with enhancement-type load device are shown in the figure.

Load transistor can be operated either, in saturation region or in linear region, depending on the bias voltage applied to its gate terminal.

The saturated enhancement load inverter is shown in the fig.(a).

It requires a single voltage supply and simple fabrication process and so VOH is limited to the VDD – VT.

The linear enhancement load inverter is shown in the fig. (b).

It always operates in linear region; so  VOH level is equal to VDD .

But, the disadvantage of linear enhancement inverter is, it requires two separate power supply and both the circuits suffer from high power dissipation.

Therefore,enhancement inverters are not used in any large-scale digital applications.

The advantages of the depletion load inverter are:

Inverters with depletion-type load device are shown in the figure below. 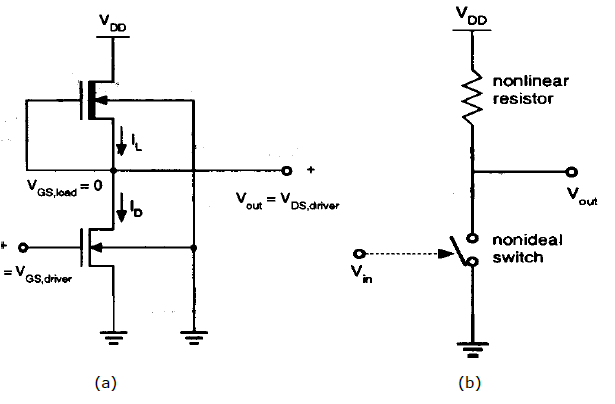 As shown in the figure, the gate and source terminal of load are connected; So, VGS = 0.

Thus, the threshold voltage of the load is negative. Hence,

Therefore, load device always has a conduction channel regardless of the input and output voltage level.

When the load transistor is in saturation region, the load current is given by,

When the load transistor is in linear region, the load current is given by,

The voltage transfer characteristics of the depletion load inverter is shown in the figure given below. 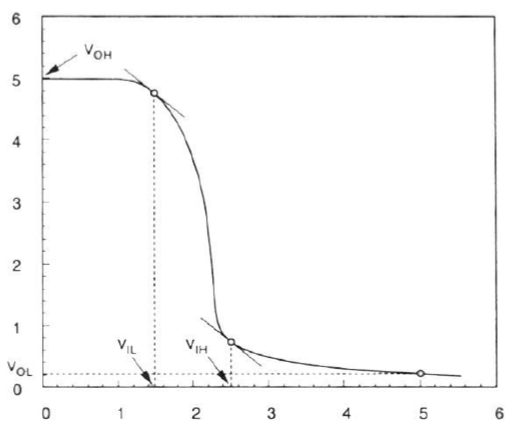 The CMOS inverter circuit is shown in the figure. 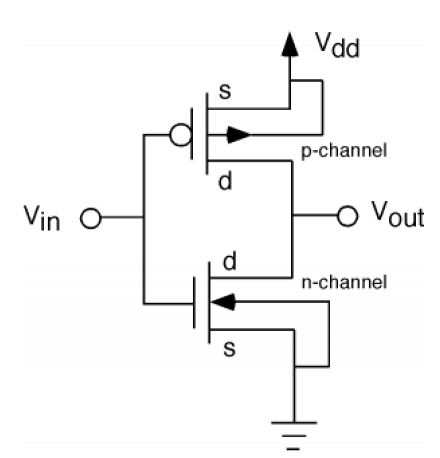 Here, nMOS and pMOS transistors work as driver transistors; when one transistor is ON, other is OFF.

The input is connected to the gate terminal of both the transistors such that both can be driven directly with input voltages.

So VSB = 0 for both the transistors.

When the input of nMOS is smaller than the threshold voltage (Vin < VTO,n), the nMOS is cut – off and pMOS is in linear region. So, the drain current of both the transistors is zero.

Therefore, the output voltage VOH is equal to the supply voltage.

When the input voltage is greater than the  VDD+ VTO,p, the pMOS transistor is in the cut-off region and the nMOS is in the linear region, so the drain current of both the transistors is zero.

Therefore, the output voltage VOL is equal to zero.

The nMOS operates in the saturation region if  Vin > VTO , and if following conditions are satisfied.

The pMOS operates in the saturation region if  Vin <  VDD + VTO,p , and if following conditions are satisfied.

For different value of input voltages, the operating regions are listed below for both transistors.

The VTC of CMOS is shown in the figure below: 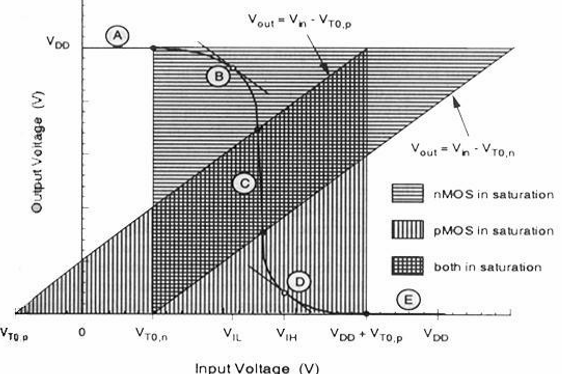