What Is A Filter Circuit

A filter circuit is a device which removes the a.c. component of rectifier output  and allows only d.c. component  to reach the load.

A filter circuit is installed between the rectifier and the load  as shown in fig.1(i)

A filter circuit is generally a combination of inductors(L) and capacitors(C).The filtering action of L and C depends upon the basic electrical principles. A capacitor C passes a.c. readily but does not pass d.c. at all. On the other hand, an inductor L  opposes a.c. but allows d.c. to pass  through it.  Hence a suitable network of  L and C can effectively  remove the a.c. component  and allows only  the d.c. component to reach the load.

The three most commonly used filter circuits are:

The circuit diagram of a typical capacitor filter is shown in Fig.2(i).Its input and output waveform are shown  in fig.2(ii) and Fig.2(iii) respectively. 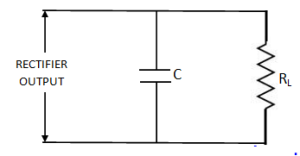 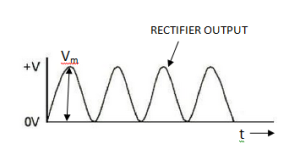 The voltage across the load will decrease only slightly because immediately the next voltage peak comes and recharges the capacitor.

This process is repeated again and again and the output voltage waveform becomes ABCDEFG as shown in the fig.2(iii).

We can see that very little ripple is left in the output.

For small load currents up to 50mA this type of filter is preferred. It is commonly used in transistor radio battery eliminators. 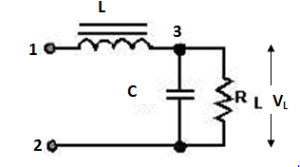 The circuit of a choke input filter consists of a choke L connected in series with the rectifier output and a filter capacitor C, which is connected across the load resistance RL. Here in this fig.3(i) only a single filter section is shown. But normally several identical sections are used to reduce the pulsations as effectively as possible.

The pulsating output of the rectifier is applied across the terminal 1 and 2 of the filter circuit.

This pulsating output contains both a.c. and d.c. component.

As we know, the choke L offers a high resistance to the passage of a.c. component and passes the d.c. component readily.

This results in the reduced pulsation at terminal 3 as most of the a.c. component are blocked by the choke L now.

At terminal 3, the rectifier output contains d.c. component and the remaining part of a.c. component which are managed to pass through the choke L.

Therefore, only the d.c. component reaches the load RL.

Fig.4(i) shows the circuit diagram of a typical capacitor input filter or π–filter. Fig.4(ii) shows the rectifier output, which is applied as the filter input and the filter output wave forms. 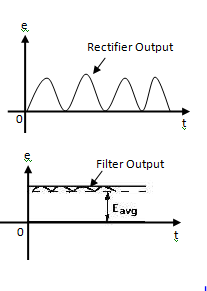 As we can see in Fig.4(i) the shape of the circuit diagram of this filter circuit looks like π, hence it is also known as π-filter.

In this circuit a filter capacitor C1 is connected across the rectifier output.

Here only one filter section is shown, but most often several identical sections are used to improve the smoothing action.

The pulsating output from the rectifier is applied across the input terminals 1 and 2 of the filter.

The filtering action of the three components i.e. C1,L  and C2 of the filter is described as below.

The filter capacitor C2 bypasses the a.c. component which the chock L has failed to block.

Hence, only the d.c. component appears across the load RL.