In full wave rectifier , current flows through the load in the same direction ( i.e. d.c.) for both the half cycles of input a.c. supply voltage. There are two types of circuits commonly used for full-wave rectifications: 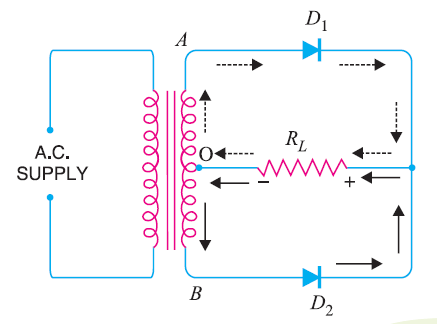 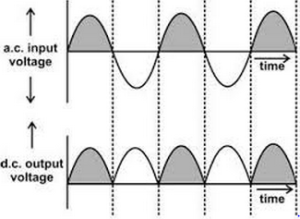 The circuits uses two diodes D1 and D2. A centre-tap secondary winding AB is connected with the two diodes such that each diode uses one half-cycle of input a.c. voltage. That means diode D1 utilises the the upper half of secondary winding for rectification and diode D2  uses the lower half.

During the positive half cycle of secondary voltage, the end A of the secondary winding  becomes positive and end B negative.

So diode  D1 is forward biased and diode D2 is reverse biased. Hence, diode D1 conducts and diode D2 does not.

The current flows through diode D1, load resistance RL and the upper half of the secondary winding OA. This is shown by the dotted arrows.

During the negative half cycle of secondary voltage, the end A of the secondary winding  becomes negative and end B positive.

So diode D2 is forward biased and  D1 is reverse biased. Hence D2 conducts while D1 does not.

The conventional current flows through diode D2 , load resistance RL and the lower half of thr secondary winding OB as shown by the solid arrows.

As we can see that current in the load RL  flows in the same direction for both the half cycles of input supply voltage. So d.c. is  obtained across RL.

It is difficult to locate the centre tap on secondary winding.

The d.c. output is low as each diode utilizes only half of the secondary voltage.

The diodes must have high peak inverse voltage. 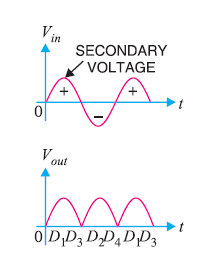 During the positive half-cycle of secondary voltage, the end P of the secondary winding becomes positive and end Q negative.

This makes diodes D1 and D3 forward biased while D2 and D4 are reverse biased. Hence  only diodes  D1 and D3 conducts.

These two diodes will be in series through the load RL as shown in Fig. 5 .

The conventional current flows through load RL is shown by the dotted arrows. It may be seen that current flows from A to B through the load RL .

During the negative half cycle of secondary voltage, end P becomes negative and end Q positive.

These two diodes will be in series through the load RL as shown in Fig. 6 .

The conventional current flow through load RL is shown by the solid arrows.

It may be seen that again the current flows from A to B through the load i.e. in the same direction as for the positive half-cycle.
Therefore, d.c. output is obtained across load RL.

The peak inverse voltage(PIV) of each diode is equal to the maximum secondary voltage of transformer  i.e. Vm.

From the Fig. 7 (ii), it is clear that two reverse biased diodes (i.e., D2 and D4) and the secondary of transformer are in parallel. Hence PIV of each diode (D2 and D4) is equal to the maximum voltage (Vm) across the secondary.

Similarly, during the next half cycle, D2 and D4 are forward biased while D1 and D3 will be reverse biased. It is easy to see that reverse voltage across D1 and D3 is equal to Vm.

Since during each half cycle two diodes that conducts are in series so voltage drop in the internal resistance of the rectifying unit is twice as in the centre-tap circuit. This is objectionable when secondary voltage is small.

As we know, a wave has a complete cycle when it repeats the same pattern. In Fig. 8 (i), the input a.c. completes one
cycle from 0° – 360°. However, the full-wave rectified wave completes 2 cycles in this period As shown in Fig.8(ii). Therefore, output frequency is twice the input frequency i.e. 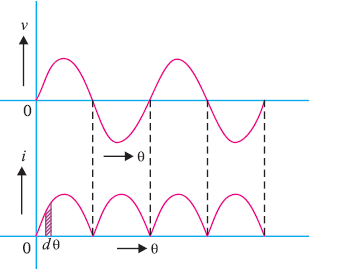 Let  v = Vmsinθ (the a.c. voltage to be rectified)

The output current is pulsating direct current. Therefore, in order to find the d.c. power, average current has to be found out.

The a.c. input power is given by :

For  a full-wave rectified wave,

The output of a rectifier consists of a d.c. component and an a.c. component, which is also known as ripple.

The a.c. component is undesirable and accounts for the pulsations in the rectifier output.

The effectiveness of a rectifier depends upon the magnitude of a.c. component in the output. i.e., the smaller this
component, the more effective is the rectifier.

The ratio of r.m.s. value of a.c. component to the d.c. component in the rectifier output is known as ripple factor i.e.