HDI PCBs are one of the fastest growing technologies in the area of PCBs.

A PCB or circuit board which has a higher wiring density per unit area as compared to the conventional PCB board is called as HDI PCB.

It is helpful in enhancing the electrical performance and also reduction in weight and size of the equipment.

HDI PCB is a better option for the high-layer count and costly laminated boards.

Check out PCBWay.com to buy cheap and affordable HDI PCBs.

The HDI PCB is also prominently featured in medical devices, as well as various electronic aircraft parts and components. 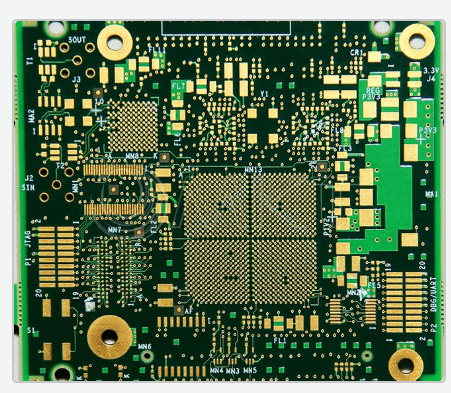 With HDI boards,  more components can be secured on both sides of the PCB, thus allowing to get more functionality out of a smaller space and expanding the overall capabilities of the equipment. HDI technology enables to add functionality while reducing the size and weight of the  products.

A shorter distance between components and a higher number of transistors can improve the electrical performance. These features result in lower power consumption, which improves signal integrity. Smaller sizes correlate to quicker signal transmissions and more significant reductions in overall signal losses and crossing delays.

With proper planning and manufacturing, HDI boards can be more cost-effective than other options because they require fewer raw materials due to their smaller size and the low number of layers they need. For a product that would have once required multiple traditional PCBs, now can be replaced by only one HDI board. Hence,it is possible now to get more functionality and value out of a smaller area and less material.

The ability to use fewer materials — and even fewer boards — combined with design efficiencies linked to HDI technology can translate to faster production times and a shorter timeframe needed to get the product to market. Components and via are relatively easy to place in HDI PCBs, and the high electrical performance reduces the time needed for testing and troubleshooting.

According to different layer up, HDI PCB is divided into three basic types, such as :

This is suitable for BGA with lower I/O counts.

It has fine line, microvia and registration technologies capable of 0.4 mm ball pitch.

It has excellent mounting stability and reliability.

It contains copper filled via.

This type of  HDI PCB contains 2 or more “build-up” of high-density interconnection layers.

Microvias on different layers can be staggered or stacked.

These are suitable for BGA with smaller ball pitch and higher I/O counts.

These can be used to increase routing density in a complicated design.

It has thin board capabilities.

It contains copper filled via.

All the layers of a PCB are high-density interconnection layers which allow the conductors on any layer of the PCB to be interconnected freely with copper filled stacked microvia structures.

This provides a reliable interconnect solution for highly complex large pin-count devices, such as CPU and GPU chips utilized on handheld and mobile devices.

It has superior electrical characteristics.

HDI boards can be found in laptops, smartphones, tablets, and wearables, as well as other consumer electronics like digital cameras and GPS devices. HDI PCBs play a crucial role in enabling the everyday consumer to access these powerful technologies. They’re also essential components of IoT devices for the home, including smart thermostats, fridges and the many other connected devices available.

HDI PCBs also found their application in devices such as routers, switches, modules and semiconductors. Anytime you use electronic communications, a computerized gadget or a device that uses radio waves, there’s a good chance you’re using an HDI board. Digital video and audio equipment also frequently uses HDI technology. These boards are present in devices used for personal communication, as well as the networks used by businesses.

HDI PCBs allow manufacturers to fit more capabilities into smaller spaces and devices that weigh less. This is especially useful in the automotive and aerospace industries, where lower weight can mean more efficient operation. Like almost everything else, cars are becoming more connected and computerized. Today’s cars have around 50 microprocessors on board that play a role in engine controls, diagnostics, safety features and other conveniences. Many new features such as onboard WiFi and GPS, rearview cameras and backup sensors rely on HDI PCBs. As automotive technology continues to advance, HDI tech will likely play an increasingly important role.

Nowadays industrial equipment are also becoming more computerized, and IoT devices are becoming more common in manufacturing, warehousing, and other industrial settings. Many of this advanced equipment employs HDI technology. Today, businesses use electronic tools to keep track of inventory and monitor equipment performance. Increasingly, machinery includes smart sensors that collect usage data and connect to the internet to communicate with other smart devices, as well as to relay information to management and help optimize operations.