BitTorrent is a popular P2P protocol for file distribution. In BitTorrent lingo, the collection of all peers participating in the distribution of a particular file is called a torrent. Peers in a torrent download equal-size chunks of the file from one another, with a typical chunk size of 256 Kbytes. When a peer first joins a torrent, it has no chunks. Over time it accumulates more and more chunks. While it downloads chunks it also uploads chunks to other peers. Once a peer has acquired the entire file, it may (selfishly) leave the torrent, or (altruistically) remain in the torrent and continue to upload chunks to other peers. Also, any peer may leave the torrent at any time with only a subset of chunks, and later rejoin the torrent.

Let’s now take a closer look at how BiTorrent works . Since BitTorrent is a rather complicated protocol and system, we’ll only describe its most important mechanisms, sweeping some of the details under the rug; this will allows us to see the forest through the leaves. Each torrent has an infrastructure node called a tracker. When a peer joins a torrent, it registers itself with the tracker and periodically informs the tracker that it is still in the torrent. In this manner, the tracker keeps track of the peers that are participating in the torrent. A given torrent may have fewer than ten or more than a thousand peers participating at any instant of time.

As shown in the figure below , when a new peer, Alice, joins the torrent, the tracker randomly selects a subset of peers (for concreteness, say 50) from the set of participating peers, and sends the IP addresses of these 50 peers to Alice. 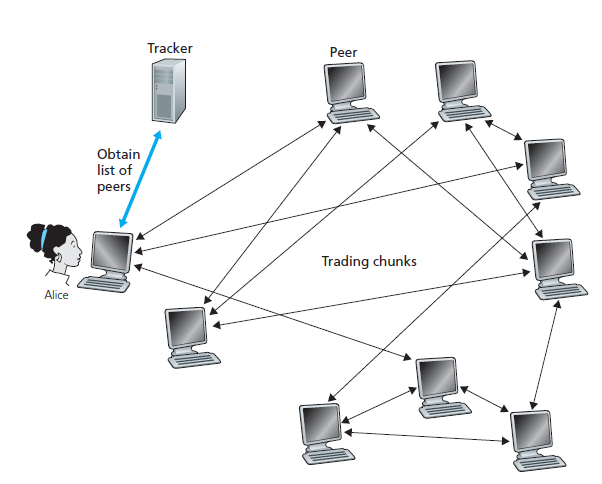 At any given time, each peer will have a subset of chunks from the file, with different peers having different subsets. Periodically, Alice will ask each of her neighbouring peers (over the TCP connections) for the list of chunks they have. If Alice has L different neighbours, she will obtain L lists of chunks. With this knowledge, Alice will issue requests (again over the TCP connections) for chunks she currently does not have.

To determine which requests she responds to , BitTorrent uses a clever trading algorithm. The basic idea is that Alice gives priority to the neighbours that are currently supplying their data at the highest rate. Specifically, for each of her neighbours, Alice continually measures the rate at which she receives bits and determines the four peers that are feeding her bits at the highest rate. She then reciprocates by sending chunks to these same four peers. In BitTorrent lingo, these four peers are said to be unchoked. Importantly, every 30 seconds, she also picks one additional neighbour at random and sends it chunks. Let’s call the randomly chosen peer Bob. In BitTorrent lingo, Bob is said to be optimistically unchoked. Because Alice is sending data to Bob, she may become one of Bob’s top four uploaders, in which case Bob would start to send data to Alice. If the rate at which Bob sends data to Alice is high enough, Bob could then, in turn, become one of Alice’s top four uploaders. In other words, every 30 seconds, Alice will randomly choose a new trading partner and initiate trading with that partner. If the two peers are satisfied with the trading, they will put each other in their top four lists and continue trading with each other until one of the peers finds a better partner. The effect is that peers capable of uploading at compatible rates tend to find each other. The random neighbour selection also allows new peers to get chunks, so that they can have something to trade. All other neighbouring peers besides these five peers (four “top” peers and one probing peer) are “choked”, that is, they do not receive any chunks from Alice. BitTorrent has a number of interesting mechanisms that are not discussed here, including pieces (mini-chunks), pipelining, random first selection, endgame mode, and anti-snubbing.

The incentive mechanism for trading just described is often referred to as tit-for-tat. It has been shown that this incentive scheme can be circumvented . Nevertheless, the BitTorrent ecosystem is wildly successful, with millions of simultaneous peers actively sharing files in hundreds of thousands of torrents. If BitTorrent had been designed without tit-for-tat (or a variant), but otherwise exactly the same, BitTorrent would likely not even exist now, as the majority of the users would have been freeriders.

Many of the P2P live streaming applications, such as PPLive and ppstream have been inspired by BitTorrent.