Among many problematic areas a system design engineer may have, Electromagnetic compatibility (EMC) and  electromagnetic interference (EMI) are of two main concerns .

EMC is associated with the generation, propagation, and reception of electro-magnetic energy.

When  different circuits, traces, vias, and PCB materials operate simultaneously, care must be taken to make sure such signals are compatible and do not interfere with each other .

Electromagnetic compatibility(EMC) is the concept of enabling different electronics devices to operate without mutual interference i.e., Electromagnetic Interference or EMI , when they are operating in close proximity to each other.

In such an electromagnetic environment, the PCB designer’s goal is to ensure that various energy elements are reduced to maintain minimal interfering effects.

Now we will discuss  different methods to avoid these problems in a printed circuit board design.

Designing a PCB’s ground plane plays an important role in reducing the EMI.

The first step is to increase  the PCB’s ground area as much as possible.This reduces emissions, crosstalk, and noise.

Each component should be connected to a ground point or plane. If that will be not done, the neutralizing effect of a solid ground plane provides will not be fully utilized.

A highly complex PCB design has several regulated voltages. Ideally, every reference voltage should have its corresponding ground plane. However, an excessive number of ground planes will increase the PCB fabrication cost, making it very expensive. (Check out PCBWay’s PCB Assembly Service).

What we can do, is to split the ground planes at three to five different places, accommodating multiple ground sections in one ground layer. This keeps the cost of board fabrication cost in check while reducing EMI and EMC.

In a multi-layer PCB it is best to have a solid ground plane versus copper thieving or hashed ground planes as it offers both a lower level of impedance with the current path serving as the backward source at its optimum level.This is shown in Fig.1 below.

Vias is used in PCBs for conductive connections between different layers .

These vias create inductance and capacitance. Sometimes,when a vias is made in a trace, it causes change in characteristic impedance which in result creates reflections . Hence, special care should be taken while using them.

Avoid vias as much as possible if it’s a differential trace. If that’s impossible, then vias need to be used in both traces to compensate for the delay like in the signal and return paths.

To reduce EMI it is important to avoid 90° angles for traces, vias, and other components since right angles cause radiation.

In such cases, capacitance increases in  that corner and characteristic impedance changes causing reflection. This in turn causes the EMI interference.

To avoid 90° angles, traces should be routed at least on two 45° angles to the corners.

We can use twisted pair cable, which keeps coupling to a lower level and cancels any generated magnetic fields.

For high-frequency signals, a shielded cable is essential, connected to ground at the front and back, which cancels whatever EMI interference is present.

Physical shields are metallic packages that cover all or part of a system and play a major role in keeping EMI from entering into the PCB’s circuitry. Depending on design requirements, these shields act like closed conductive containers connected to ground .They reduce antenna loop size and absorb EMI.

Analog circuits carry high current and should be kept away from high-speed traces or switching signals. If possible, they should be guarded with a ground signal.

On a multi-layer PCB, while routing analog traces, there is should be a ground plane between them and the switching or high-speed traces should be on a different plane. Therefore, these signals, which have different characteristics, stay separately.

Sometimes a low pass filter can be included to eliminate high frequency noise coupled from surrounding traces. The filter suppresses the noise, allowing a stable current to continue on the return path.

In digital circuitry design, at high-speed levels, signals and clocks should be kept as short as possible and adjacent to the ground plane because, as noted earlier, the ground plane keeps crosstalk, noise, and radiation levels in check and within the acceptable level limits.

Digital signals should also be kept away from the power plane. If they’re close to it they can create noise or induction, thereby deteriorating the signal and weakening it.

Traces are  important to ensure that current is properly propagated.

Two high-speed signals running in parallel create EMC and EMI, such as crosstalk.

Hence the return current path should be kept as short as possible with the least resistive path. Return path traces should be about the same length as the transmit traces.

Induced currents in a perfectly balanced, routing stable environment should cancel each other, thus eliminating crosstalk. However, this is not possible . Therefore, care must be taken to keep crosstalk on all the traces to as minimum a level as possible.

Crosstalk’s effect on adjacent traces can be minimized by keeping them at least twice the trace width apart. For example, if trace width is five mils, minimum distance between two parallel traces should be 10 mils or more.

Decoupling capacitors are used to reduce the undesirable effects of crosstalk.

These capacitors are placed between the power pin and ground pin of a device, which ensures low AC impedance to  reduce noise and crosstalk.

To reach low impedance over a wide range of frequency, several decoupling capacitors should be used. 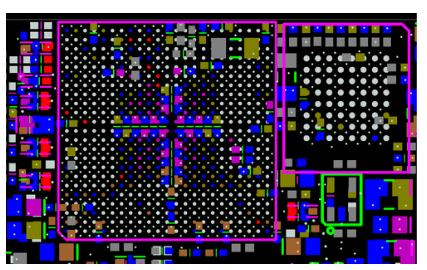 Check out PCBWay.com to get a quotation as they have tons of stuffs that could be of help to your project.