Manufacturing costs of a PCB depend on several factors which must be taken into consideration during the design process.

When you are new in the PCB field, maybe your design is not optimized from a cost point of view.

Normally the majority of beginner PCB designers do not consider basic width, spacing and many other rules that have a big impact not only in the tooling costs but also in the unit prices.

Factors affecting the cost of PCB

In this article we will discuss several recommendations which will help  to keep the tooling and manufacturing costs to a minimum.

This is the most obvious rule. Since the cost of a PCB is  approximately proportional to the board’s area,  the cost tends to go up when the board size is bigger.

Hence, one should try to keep the board size or area to a minimum.

Some PCB fabrication companies charge additional costs for irregular shapes i.e., different from standard shapes such as squares or rectangles.

Figure.1 shows a PCB with an irregular shape. 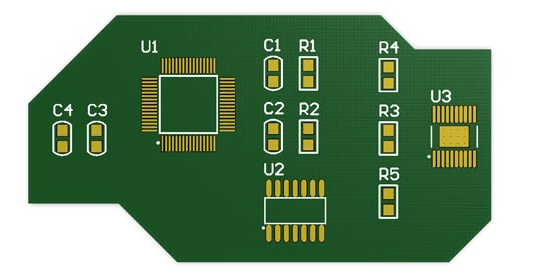 Fig.1: PCB with an irregular shape

Hence, if the shape of the PCB  is not important for the particular design then designing boards with square or rectangular shapes are recommended  to reduce the costs.

The PCB fabrication companies also charge extra cost for making slots or internal cutouts on the board.

Hence, if it is not necessary to have slots or internal cutouts for mounting purpose, it is recommended  to avoid them. Which in turn will reduce the cost.

Figure.2 shows a printed circuit board with a rectangular slot. 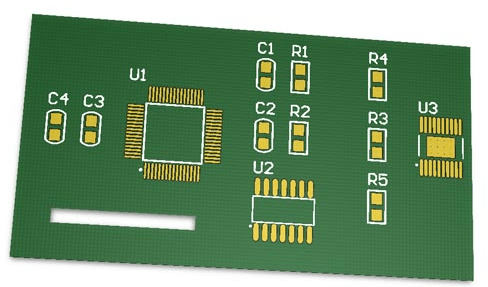 Fig 2. PCB with a rectangular slot

4. Right Size of copper objects and the spacing between them

The physical dimensions of copper objects and spacing between them is inversely proportional to the cost of PCB.

That means, as the physical dimensions of copper objects and spacing between them decrease, the cost of the PCB increases.

For printing smaller objects on copper, machines with better precision and smaller tolerances are required. Hence, more precision means more cost, and this increase in cost is important especially for low quantities and prototypes.

Here physical dimensions of copper objects refer to pads (SMD and thru-hole), tracks, vias and any object that are printed on a copper layer.

The case of tracks and pads are shown in  figure.3 below. 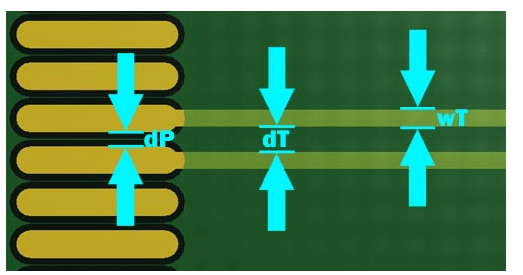 Fig.3 : Spacing between pads and tracks

EDA software generally have a section where you can enter physical rules, which once entered are constantly checked by the DRC (design rule check) system for avoiding out-of-rule errors.

In a PCB, the smaller the holes and annular rings, the higher is the price.

Manufacturing smaller holes involves the use of more precise machinery which increases its costs.So we should try to use always the bigger diameter possible for holes.

Some manufacturers charge an extra cost if you need holes smaller than 0.4[mm]. Hence you must ask your PCB manufacturer before determining which is the minimum hole size for an standard PCB ,which does not include any extra cost.Here the hole’s diameter is denoted by dH.

You can check out the PCB Prototype service of PCBWay.com as they do not charge extra fees for PCBs with smaller hole sizes.

There is an important specification  known as minimum annular ring which applies only to thru-hole pads and vias.

This  is defined as the minimum distance between the hole’s border and the pad’s border.In other words, the minimum width of the copper ring that confines the hole.

This  concept is shown in  figure.4 and figure.5 below. 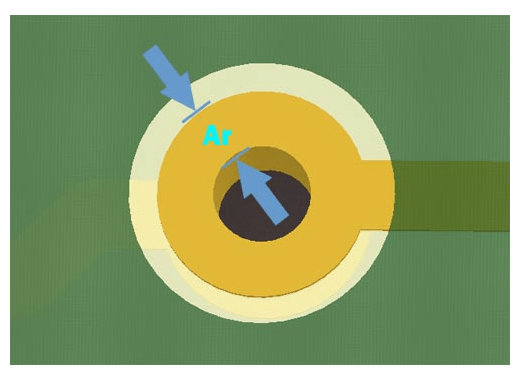 Fig.4 : Annular ring concept for a round thru-hole pad or via

Figure .4 shows the minimum annular ring concept for a round thru-hole pad or via .Here it can be noted that the annular ring width is homogeneous around the hole.

The Minimum annular ring concept for an oblong shaped thru-hole pad is shown in figure.5 below. 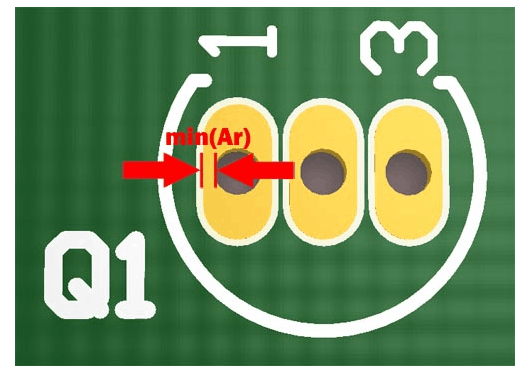 Here in this case the width is not homogeneous around the hole. The minimum annular ring is shown by the red lines in figure.5 .

The PCB cost will be increased if the minimum annular ring is smaller than the standard specifications of the PCB manufacturer.so it is very important to add this rule to the EDA software before designing the PCB.

For example, some manufacturers charge an extra cost if the minimum annular rings  smaller than 0.3[mm] are needed. Hence,it is always a good idea to contact the manufacturer and ask them which is the minimum standard value for this variable with no extra cost involved.

As discussed in the previous article (Basic concepts of PCB) , there are basically 3 types of vias such as  through-hole vias, blind vias and buried vias in a PCB.

Blind and buried vias are used for high density and high frequency complex boards and are more expensive than the through-hole vias.

Hence, if it is not necessary,it is recommended  to avoid them. Which in turn will reduce the cost.