The problems associated with designing a PCB are many folds.

The signal integrity within the PCB needs to be analyzed before finalization of PCB routing and for this simulation is  a must.

The major sources of signal integrity problems are the reflections along the PCB tracks.

What is Reflection Noise ?

When a signal travels from one digital IC to another on the PCBs, the state of the signal line is changed.

This change in state results changes in the electromagnetic fields, which can be described as a wave as it moves through the circuit.

Waves can be defined as the phenomena that transfer energy from one location to another, with conductors guiding the path of propagation

When an electromagnetic wave encounters a boundary while travelling from one medium to another, Reflection noise results .

When the wave meets the boundary, part of the energy is transmitted as signal and part of it is reflected.

In electrical language, the medium where this boundary occurs is usually described in terms of electrical impedance. That means, the boundary is where the impedance changes.

Impedance is composed of resistive and reactive elements.

The recoverable energy in a circuit exists in the electromagnetic fields that permeate and surround conductors, inductors, and capacitors.

Whenever a change in impedance occurs in a circuit, some amount of reflection will occur.

Now this reflected wave will travel back to the next boundary (the location where there is a change in impedance) and reflect again.

This process will continue indefinitely until the energy is absorbed by the circuit or dissipated into the environment.

Therefore, we can say the main reason for reflection is the incompatibility of impedance of the transmission lines.

Usually, physical properties of PCB routing has great influence on the transmission lines.

Example of such properties are, routing material, routing width, routing thickness, distance between other routing planes and planes and dielectric constant of adjacent material.

When signals travels along the transmission lines, changes in impedance can occur at any time.

If the impedance remains constant throughout the transmission lines, it will be transmitted forward normally.

However,  reflection will occur,  as soon as  the signal meets any impedance changes.

The reflection amount is measured in terms of reflection coefficient.

Reflection coefficient can be defined as the ratio between reflection voltage and original signal voltage.

Mathematically it is written as :

Where Z1 = impedance after change

When a lead is not terminated properly, signal pulse from driving end will be reflected at the receiving terminal.

And when these reflected signals are quite strong, stacked waveform will  change  their logic condition which leads to signal distortion.

It refers to the first peak value that exceeds the highest voltage level for the rising edge.

This  overshoot may destroy the protection diodes, leading to early failure of the PCB.

It refers to the first valley value that exceeds the lowest voltage level for the falling edge.

Undershooting may possibly result the generation of  false clock signals, which lead to misreading and miswriting operation of system.

Another result of reflection is oscillation.

Oscillation is nothing but repeated overshooting and undershooting within a clock circle.

This is actually the result of the fact that redundant energy generated from reflection fails to be absorbed in time in circuits.

The  cause of reflection includes :

In the following part we are going to discuss the  various methods to manage reflection noise in the PCB design.

As we have already discussed, the main reason of reflection noise is the change in impedance, hence the first thing we should consider is  to maintain constant impedance for the traces whenever possible.

Let’s discuss the following steps to maintain constant impedance for the traces.

Step : 1 – Calculate the impedance of your traces

In order to maintain constant impedance, first we need  to calculate the impedance of the traces.

Most of the the  PCB program have this feature to do this. However, there are also online tools available for this purpose.

Once  the trace and space width are determined, we should maintain them along the routes.

To maintain constant impedance in  differential pairs or single-ended traces, we must maintain :

If you route a random trace over the impedance-controlled pairs ,  the impedance will change and a point of reflection will be created.

We should always use impedance-matching circuitry which is calculated with Smith Charts, online tools, etc. , whenever we need to change impedance, for example: from a linear amplifier to an antenna.

Next we should also consider how to reduce the occurrence of reflection points .

Let’s discuss how to do this.

1. Look at your vias at the edge of the board carefully

For high-speed circuit designer, vias can be a problem.

If the extends beyond the signal traces to unused layers, the impedance of the circuit suddenly changes.

At the transition, that is at the edge of a board, there will be certainly an impedance mismatch as the traces leave the via (~50-150 ohms) and enter air (~377 ohms).

This creates a reflection point at that location which can severely degrade a signal.

The above issue can be resolved by asking your PCB manufacturer to back drill your vias .

This will remove the via from the board on the unused outer layers. 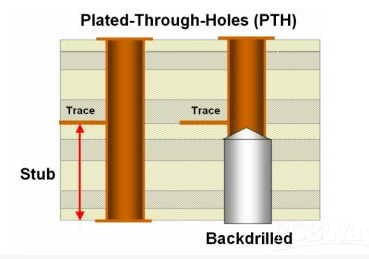 This can be done by using damping resistors .

Another important technique to reduce the reflection noise is by using damping resistors in series near all driving signal sources with fast rise/fall times.

This is also known as a snubbing resistor.

Any signal reflection that occurs will be quickly attenuated by each pass through the resistor.

These are typically <100Ω resistors placed close to the driving signal source such as, clock source, GPIO, etc.

The idea behind this is to create a damped circuit, where the signal rises to the appropriate logic level once without excessive overshoot and ringing.

In case you need further assistance, you can contact a PCB Manufacturing company like PCBWay.com.They will not only help you from the technological aspect but also will provide you PCBs that meet your project criteria. Moreover, they have sponsorship programs that can help you a lot. You can give them a try and order PCBs to check their services.