The equation of AM wave in its simplest form i.e. single tone modulation, is expressed as :

In power calculation of AM signal, it has been observed that for single-tone sinusoidal modulation, the ratio of the total power to the carrier power is :

where ma is the modulating index

Thus, for 100% modulation about 67% of the total power is required for transmitting the carrier which does not contain any information .

Hence, if the carrier is supressed, only the sidebands remain and in this way a saving of two-third power may be achieved at 100% modulation .

The resulting signal obtained by supressing the carrier from the modulated wave is called Double sideband supressed carrier (DSB-SC) system .

A DSB-SC signal can be obtained by simply multiplying modulating signal x(t) with carrier signal cosωct . So we need to use a device called product modulator for the generation of DSB-SC waves .

There are two forms of product modulators as under :

A linear modulator is a system whose gain or transfer function can be varied with time by applying a time varying signal at certain points .

The gain is proportional to signal f(t) .

Let us consider fig.2 in which the carrier signal cosωct is applied at the input terminal and x(t) is applied as the gain varying signal .

Therefore, the output is given by :

This is a modulated signal (DSB-SC) .

AS an alternative we can use the carrier as gain varying signal and x(t) as the input signal as shown in fig 3 .

Fig 3: Another variation of Linear Modulator

The gain of the modulator is given by :

This is same as before .

The balanced modulators are used to suppress the unwanted carrier in AM wave .

The suppression of carrier can be done using the following two balanced modulators :

The block diagram of a balanced modulator is shown in fig.5 . 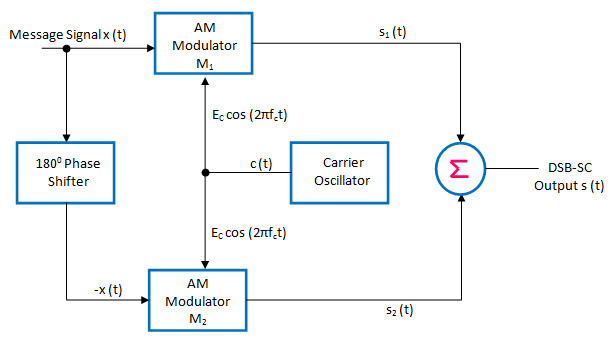 It consists of two standard amplitude modulators arranged in the balanced configuration so as to suppress the carrier completely .

The carrier signal c(t) is connected to both AM modulators M1  and  M2 .

These are then applied to a subtractor and the subtractor produces the desired DSB-SC  signal as under :

Hence, it represents a DSB-SC signal .