You shall be learning all about IP addressing and subnetting in this tutorial.

Although you may be thinking that addressing must be a straightforward topic , hopefully by the end of this tutorial you’ll be convinced that internet addressing is not only a juicy, subtle, and interesting topic but also one that is of central importance to the internet.

Before discussing IP addressing, however, we’ll need to say a few words about how hosts and routers are connected into the network.

A host typically has only a single link into the network; when the IP in the host wants to send a datagram, it does so over this link. The boundary between the host and the physical link is called an interface. Now consider a router and its interfaces. Because a router’s job is to receive a datagram on one link and forward the datagram on some other link, a router necessarily has two or more links to which it is connected. The boundary between the router and any one of its links is also called an interface.

A router thus has multiple interfaces, one for each of its links. Because every host and router is capable of sending and receiving IP datagrams, IP requires each host and router interface to have its own IP address. Thus, an IP address is technically associated with an interface, rather than with the host or router containing that interface.

Each IP address is 32 bits long (equivalently, 4 bytes), and there are thus a total of 232 possible IP addresses. By approximating 210 by 103, it is easy to see that there are about 4 billion possible IP addresses. These addresses are typically written in so-called dotted-decimal notation, in which each byte of the address is written in its decimal form and is separated by a period (dot) from other bytes in the address.

Each interface on every host and  router in the global internet must have an IP address that is globally unique (except for interfaces behind NATs). These addresses cannot be chosen in a willy-nilly manner, however. A portion of an interface’s IP address will be determined by the subnet to which it is connected.

The figure below provides an example of IP addressing and interfaces. 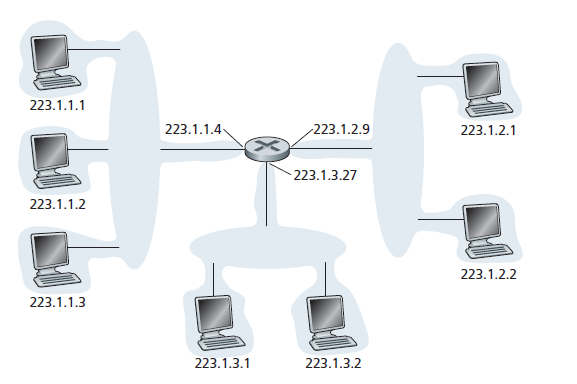 In this figure, one router (with three interfaces) is used to interconnect seven hosts. Take a closer look at the IP address assigned to the host and router interfaces, as there are several things to notice.

In IP terms, this network interconnecting three host interfaces and one router interface forms a subnet [RFC 950]. (A subnet is also called an IP network or simply a network in the internet literature). IP addressing assigns an address to this subnet: 223.1.1.0/24, where the /24 notation, sometimes known as a subnet mask, indicates that the leftmost 24 bits of the 32 bit quantity define the subnet address. 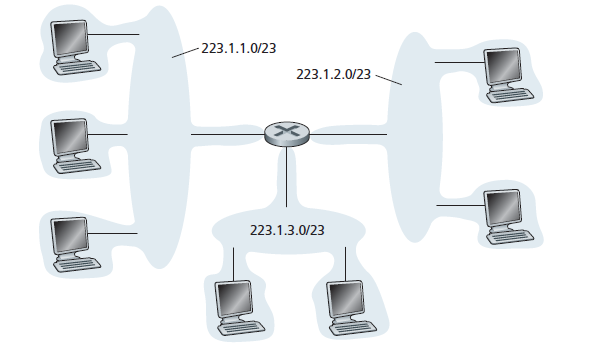 The IP definition of a subnet is not restricted to Ethernet segments that connect multiple hosts to a router interface. To get some insight here, consider the figure below (4.17), which shows three routers that are interconnected, one for each point-to-point link and one for the broadcast link that directly connects the router to a pair of hosts. 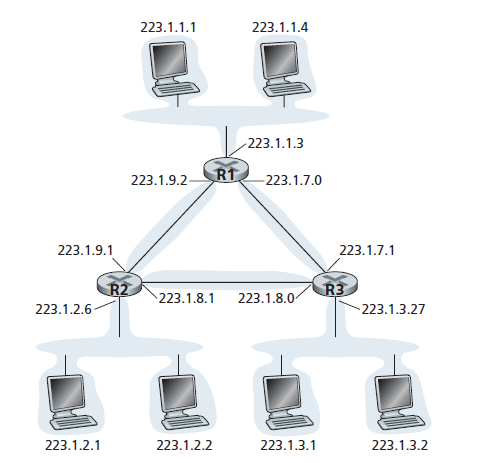 If we apply this procedure to the interconnected system in the above figure, we get six islands of subnets.

From the discussion above, it’s clear that an organization (such as a company or academic institution) with multiple Ethernet segments and point-to-point links will have multiple subnets, with all of the devices on a given subnet having the same subnet address.

The x most significant bits of an address of the form a.b.c.d/x constitute the network portion of the IP address, and are often referred to as the prefix (or network prefix) of the address.

Before CIDR was adopted, the network portions of an IP address were constrained to be 8,16, or 24 bits in length, and an addressing scheme known as classful addressing, since subnets with 8-, 16- , and 24-bit subnet addresses were known  as class A, B and C networks, respectively.

The requirement that the subnet portion of an IP address be exactly 1,2, or 3 bytes long turned out to be problematic for supporting the rapidly growing number of organizations with small and medium-sized subnets. A class C(/24) subnet could accommodate only up to 28-2 = 254 hosts (two of the 28=256 addresses are reserved for special use)- too small for many organizations. However, a class B(/16) subnet, which supports upto 65,634hosts, was too large. Under classful addressing, an organization with, say 2,000 hosts was typically allotted a class B(/16) subnet address. This led to a rapid depletion of the class B address space and poor utilization of the assigned address space. For example, the organization that used a class B address for its 2,000 hosts was allocated enough of the address space for up to 65,534 interfaces – leaving more than 63,000 addresses that could not be used by other organizations.