For example, Ethernet frames can carry upto 1,500 bytes of data, whereas frames for some wide-area links can carry no more than 576 bytes.

Having a hard limit on the size of an IP datagram is not much of a problem. What is a problem is that each of the links along the router between sender and destination can use different link-layer protocols, and each of these protocols can have different MTUs.

To understand the forwarding issue better, imagine that you are a router that interconnects several links, each running different link-layer protocols with different MTUs. Suppose you receive an IP datagram from one link. You check your forwarding table to determine the outgoing link, and this outgoing link has an MTU that is smaller than the length of the IP datagram. Time to panic – how are you going to squeeze this oversized IP datagram into the payload field of the link-layer frame?

Fragments need to be reassembled before they reach the transport layer at the destination. Indeed, both TCP and UDP are expecting to receive complete, unfragmented segments from the network layer. The designers of IPv4 felt that reassembling datagram in the routers would introduce significant complication into the protocol and put a damper on router performance. (if you were a router, would you want to be reassembling fragments on top of everything else you had to do?). Sticking to the principle of keeping the network core simple, the designers of IPv4 decided to put the job of datagram reassembly in the end system rather than in network routers.

When a destination host receives a series of datagrams from the same source, it needs to determine whether any of these datagrams are fragments of some original larger datagram.

To allow the destination host to perform these reassembly tasks, the designers of IP (version 4) put identification flag, and fragmentation offset fields in the IP datagram header.

The figure below shows an IP datagram fragmentation example . 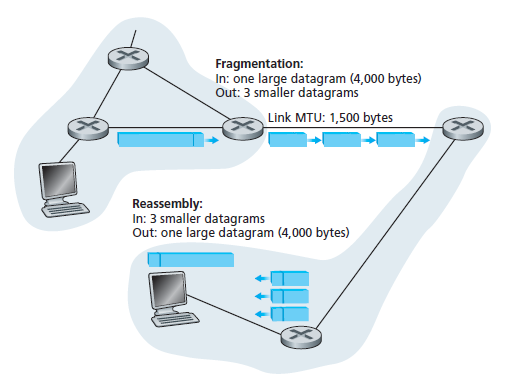 This implies that the 3,980 data bytes in the original datagram must be allocated to three separate fragments (each of which is also an IP datagram).

Suppose that the original datagram is stamped with an identification number of 777.The characteristics of three fragments are shown in the table below.

The values in the above table reflect the requirement that the amount of original payload data in all but the last fragment be a multiple of 8 bytes, and that the offset value be specified in units of 8-byte chunks.

But, we know that if TCP is being used at the transport layer, then TCP will recover from this loss by having the source retransmit the data in the original datagram.

We have just learned that IP fragmentation plays an important role in gluing together the many disparate link-layer technologies. But fragmentation also has its costs: