The Karnaugh mapping , like Boolean algebra, is a simplification tool applicable to digital logic.

The Karnaugh Map  simplifies the digital logic faster and more easily in most cases.

Boolean simplification is actually faster than the Karnaugh map for a task involving two or fewer Boolean variables. It is still quite usable at three variables, but a bit slower. At four input variables, Boolean algebra becomes tedious.

For more than six to eight variables, simplification should be done by CAD (computer automated design).

In this section we’ll examine some Karnaugh Maps for three and four variables and see how they are really being used to simplify Boolean functions.

The goals for this article include the following:

A Karnaugh map provides a pictorial method of grouping together expressions with common factors and therefore eliminating unwanted variables.

The Karnaugh map can also be described as a special arrangement of a truth table.

The diagram below illustrates the correspondence between the Karnaugh map and the truth table for the general case of a two variable problem.

The values inside the squares are copied from the output column of the truth table, therefore there is one square in the map for every row in the truth table.

Around the edge of the Karnaugh map are the values of the two input variable.

A is along the top and B is down the left hand side. The diagram below explains this:

The values around the edge of the map can be thought of as coordinates.

So as an example, the square on the top right hand corner of the map in the above diagram has coordinates A=1 and B=0. This square corresponds to the row in the truth table where A=1 and B=0 and F=1.

Note that the value in the F column represents a particular function to which the Karnaugh map corresponds.

Consider the following map. The function plotted is: Z = f(A,B) = A 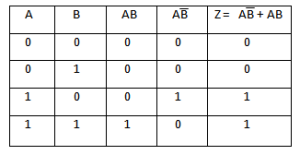 Referring to the map above, the two adjacent 1’s are grouped together.

The minimized answer therefore is Z = A.

B plotted on the Karnaugh map: 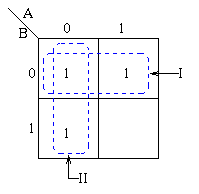 Pairs of 1’s are grouped as shown above, and the simplified answer is obtained by using the following steps: 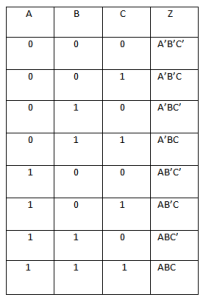 The K-map for 3 variables is plotted above.

We can notice that the columns for 11 and 10 are inter-changed. This is done to allow only one variable to change across adjacent cells. This adjustment in columns allows in minimization of logic mapped into tables.

Above is a common format of representing the K-map problems.

3 variable K– map with 1 and 0 values assigned to cells is shown in table below.

Any adjacent 2, 4 or 8 cells can be grouped to find a minimized logic value.
Following plot will show grouping of adjacent cells.

The two step minimization equation is shown below.
With reference to the Karnaugh-map above the cells under the dotted box’s can be combined to come-up with following reduced  equation. 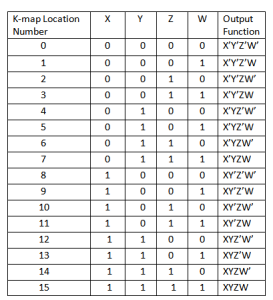 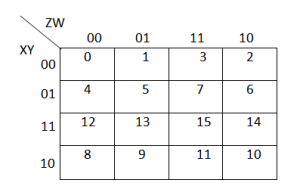 The above Boolean expression has seven product terms. They are mapped top to bottom and left to right on the K-map above.

The other product terms are placed in a similar manner.

Encircling the largest groups possible, two groups of four are shown above.

Since there are two groups, there will be two product terms in the Sum-Of-Products result of Out=AB+CD.

Shown below is a 4 variable K– map with 1 and 0 values assigned to cells. 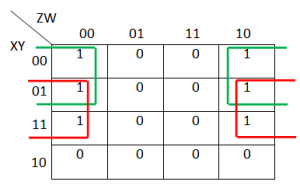 The K-map for 4 variables is plotted above.

We can notice that the column and rows for 11 and 10 are inter-changed. This is done to allow only one variable to change across adjacent cells. This adjustment in columns allows in minimization of logic mapped into tables.

Any adjacent 1, 2, 4 or 8 cells can be grouped to find a minimized logic value.

With reference to the table above the cells under the green and red boxes can be combined to come up with following reduced  equation.

Hence the minimized function will be :