PCBs whose core (base) material is metal rather than the normal FR4/CEM1-3 etc., is called as Metal Core PCB (MCPCB).

The most common metal used for MCPCB manufacturing are Aluminum, Copper and steel alloy.

Aluminum has good heat transferring and dissipation ability, but yet relatively cheaper.

Copper has even better performance but relatively more expensive.

And steel can be divided into normal steel and stainless steel. It more rigid than both aluminum and copper, but thermal conductivity is lower than them too.

Users can choose their own base/core material according to their different application.

Among all these metals, aluminum is the most economic option considering thermal conductivity, rigidness, and cost.

Therefore, the base/core material of normal Metal Core PCB (MCPCB) is made of aluminum.

MCPCBs are used instead of traditional FR4 or CEM3 PCBs (normal PCB s) because of their ability to efficiently dissipate heat away from the components. This is achieved by using a Thermally Conductive Dielectric Layer.

The main difference between a FR4 board and MCPCB is the thermal conductivity dielectric material in the MCPCB.

This dielectric material acts as a thermal bridge between the IC components and metal backing plate. And heat is conducted from the package through the metal core to an additional heat sink.

On the FR4 board the heat remains stagnant if not transferred by a topical heatsink.

To get high-quality metal core PCBs done within budget, you can check the service of PCBWay.com. You just have to upload your PCB design file ( Check PCB Instant Quote ) to get the Aluminum PCB fabrication price.

In recent years, LED industry has been rapidly developed. However, heat dissipation has always been a problem with the application and developement of LED, especially high-power LED.

Some LEDs dissipate between 2-5W of heat and failures occur when the heat from a LED is not properly removed.

When the heat remains stagnant in the LED package the light output of the LED is reduced.

The purpose of a MCPCB is to efficiently remove the heat from all topical IC’s (not just LEDs).

The aluminum base and thermally conductive dielectric layer act as bridges between the IC’s and heat sink. One single heat sink is mounted directly to the aluminum base eliminating the need for multiple heat sinks on top of the surface mounted components.

Thermal expansion and contraction is the common nature of the substance. As its own characteristics, aluminum and copper have unique advance than normal FR4, and the thermal conductivity can be 0.8~3.0 W/c.K.

It is clear that the size of the metal-based printed circuit board more stable than insulating materials. The size change of 2.5 ~ 3.0% when Aluminum PCB and aluminum sandwich panels are heated from 30 ℃ to 140 ~ 150 ℃.

These are classified into five basic types according to the different location of metalcore and trace layers of PCB.

A single layer MCPCB consists of a metal base (usually aluminum, or copper alloy, only on one side), Dielectric (non-conducting) Layer, Copper Circuit Layer, IC components and solder mask.

The prepreg dielectric provides excellent heat transfer from the foil and components to the base plate, while maintaining excellent electrical isolation.

The base aluminum/copper plate gives the single-sided substrate mechanical integrity, and distributes and transfers the heat to a heat sink, mounting surface or directly to the ambient air.

Single layer metal core PCB’s offers a wide range of benefits. Additional application areas for this technology are described below:

COB MCPCB has a micro-chip ( also known as die). The micro-chip directly touches the metal core, which dissipates heat and electrically interconnect the trace of circuit board (wire-bonding) so that power supply can be provided.

In normal MCPCB, there is a dielectric layer between trace copper and metal core, and the thermal conductivity is limited by that dielectric layers, so value can only be 1~3 W/m.K.

However, using COB MCPCB, there is no such dielectric layer because chip (die) direct touch the metal core, so thermal conductivity value of COB MCPCB will be almost the same one of metal core material itself.

The normal material of metal core is aluminum, so thermal conduviity of COB MCPCB is more than 200W/m.K.

COB process consists of three main steps to perform while manufacturing the Chip-on-Board:

By using wire bonding & epoxy packaging then directly embedded on MCPCB,  extend the lifespan of LED and unified light emission. 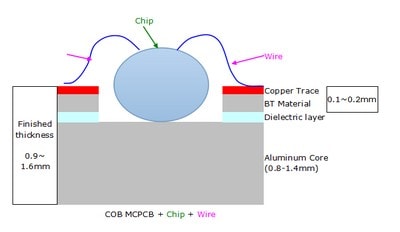 The several advantages of Chip-on-Board Metal Core PCBs make them popular among a number of different applications. Some of the major applications, which use these PCBs are:

Double layers MCPCB  consist of two layers of copper conductor on the same side of metal core (usually aluminum, copper or iron alloy).

The metal base is on the bottom of the whole MCPCB, which is different from double-sided MCPCB (the two copper layers were put on each side of metal core respectively), and you can only populate SMD on the top side.

Compared with normal FR4, this sturcture need more technology and experience on laminating of two layers together with metal core.

The processing steps of the MCPCB with the metal base embedded in the PCB are comparatively complex as hole plugging is required after primary drilling on the metal base in order to isolate it from the circuitry. 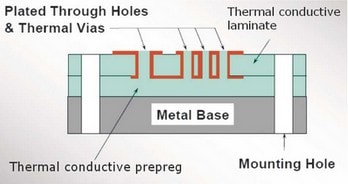 These circuit boards have a number of advantages, because of which they find their use in a wide range of applications. Some of the applications of double layer MCPCBs are:

Similar to Double layers MCPCB, it has also same two layers of copper conductor, but the metal core is in the middle of two conductors. So there are conductors (trace) on both sides of metal core, and were connected to each other by Vias.

Hence it is named as “Double sided MCPCB”, and here you can populate SMD on both top and bottom.

Different with Single layer MCPCB, the double sided MCPCB requires an additional pressing step to laminate the imaged thermal conductive laminate and metal core (also known as metal base) together. But sometimes, some raw Metal Clad material vendor supply board material which is already laminated.

Compared with normal FR4, this structure need more technology and experience on laminating of two layers together with metal core. 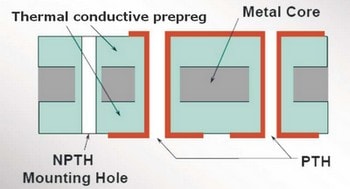 There are limitless applications of compact sized double-sided metal core PCBs. Some major applications include the following:

It’s structure is similar with FR4 Multi-Layers, but it much more complex to make.

You can populate more components on the boards. Signal and ground layer can be put into seperated layers, to achieve better performance in electrical performance.

Compared with normal FR4, this structure need more technology and experience on laminating of more than two layers together with metal core and the cost is much higher than 2 layers MCPCB or double sided MCPCB. 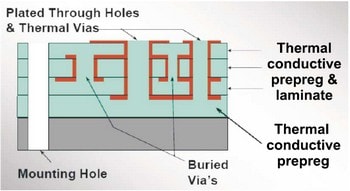 The following are a few applications that use multilayer PCBs:

You can check out the PCB Layout Service of PCBWay.com . It is one of the best places to buy cheap and affordable PCBs.