The FM systems are basically classified into following two types :

A narrow band FM is the FM wave with a small bandwidth .

For small values of mf , the values of the j coefficients are as under :

Hence, a narrow band FM wave can be expressed mathematically as under,

The (-) sign associated with the LSB represents a phase shift of  180o.

Practically, the narrow band FM systems have  mf less than 1 . The maximum permissible frequency deviation is restricted to about 5 kHz .

This system is used in FM mobile communications such as police wireless, ambulances, taxicabs etc .

As we know, the expression for instantaneous frequency of FM wave is given as :

Where, x(t) is the modulating signal .

Let us consider the expression for FM wave as under : 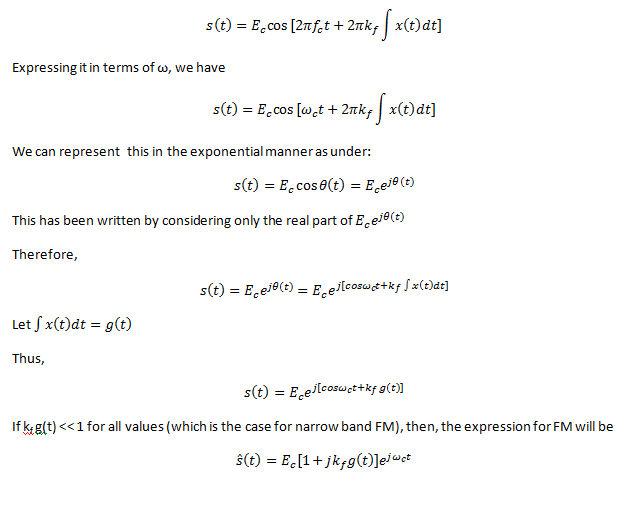 This is the expression for narrow band FM .

For large values of modulation index mf , the FM wave ideally contains the carrier and an infinite number of sidebands located symmetrically around the carrier.

Such a FM wave has infinite bandwidth and hence called as wideband FM.

The modulation index of wideband FM is higher than 1.

The maximum permissible deviation is 75 kHz and it is used in the entertainment broadcasting applications such as FM radio, TV etc.

The expression for the wideband FM is complex since it is sine of sine function.

Looking at equation (1), we can conclude the following points: