An operational amplifier (OP-Amp) is a multi-stage , direct coupled, high gain negative feedback amplifier that has one or more differential amplifiers and its concluded with a level translator and an output stage.A voltage-shunt feedback is provided in an op-amp to obtain a stabilized voltage gain.

Fig.1 shows the block diagram of an operational amplifier .

An operational amplifier (OP-Amp) is a multistage amplifier and consists of three stages such as: differential amplifier (input stage) followed by a high gain CE amplifier stage and finally class B push-pull emitter follower as the output stage.

The key electronic circuit in an OP-AMP is the differential amplifier.

The following points may be noted about OP-Amps :

Fig.2 shows the schematic symbol of an operational amplifier .

A signal applied to + terminal will appear in the same phase at the output as at the input.

A signal applied to – terminal will be shifted in phase 1800 at the output.

Fig.3 shows the equivalent circuit of a practical  OP-Amp.

The input voltage difference V2 -V1 appears between the two input terminals and the output voltage  is -A(V2 -V1) taken through the output impedance Zout.

Since the voltage gain A of a practical OP-Amp is very high, an extremely small input voltage (V2 -V1) will produce a large output(Vout).

Since the input impedance, Zin  is very high, a practical OP-Amp has very small input current.

Since the output impedance, Zout is very low, the output voltage is practically independent of the value of load connected to OP-Amp.

Fig.4 shows the a.c. equivalent circuit of an ideal OP-Amp.

The characteristics of an ideal OP-Amp are:

The consequence of these properties of an ideal OP-Amp are:

Bandwidth of an Operational Amplifier

Every OP-Amp has a bandwidth i.e. the range of frequencies over which it will work properly.

The bandwidth of an OP-Amp depends upon he closed-loop gain of the OP-Amp circuit.

One important parameter is gain-bandwidth product (GBW). It is defined as:

The slew rate of an OP-Amp is a measure of how fast the output voltage can change and its measured in volts per microsecond (V/µs).

Since frequency is a function of time, the slew rate can be used to determine the maximum operating frequency of the OP-Amp as follows:

An OP-Amp is almost always operated with negative feedback i.e. part of the output is fed back in phase opposition to the input. 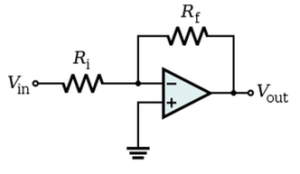 The reason is as follows:

The open-loop voltage gain of an OP-Amp is very high (usually greater than 100,000). Therefore, an extremely small input voltage drives the OP-Amp into its saturated output stage.

Since the output level of an OP-Amp can never reach 100 V, it is driven deep into saturation and the device becomes non-linear.

With negative feedback, the voltage gain (ACL) can be reduced and controlled so that OP-Amp can function as a linear amplifier.

In addition to providing a controlled and stable gain, negative feedback also controls the input and output impedance and amplifier bandwidth.