A PCB with electronic components mounted on it is called an assembled PCB and the manufacturing process is called PCB assembly or PCBA.

The PCB assembly process consists of several automated and manual steps. With each step of the process, a board manufacturer has both manual and automated options from which to choose.

In this article, we will discuss the PCBA process from start to finish and each step will be explained in detail. 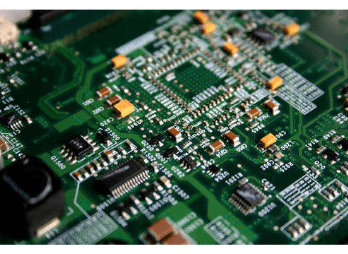 The PCBA process always starts with the most basic unit of the PCB i.e., the base, which consists of several layers, and each one plays a significant role in the functionality of the final PCB. These alternating layers include:

This is the base material of a PCB which gives the PCB its rigidity.

A thin layer of conductive copper foil is added to each functional side of the PCB — on one side if it’s a single-sided PCB, and on both sides, if it’s a double-sided PCB. This is the layer of copper traces.

On top of the copper layer is the solder mask, which gives each PCB its characteristic green color. It insulates copper traces from unintentionally contacting other conductive materials, which could result in a short. The solder, in other words, keeps everything in its place.

Holes in the solder mask are where solder is applied to attach components to the board.

Solder mask is a vital step for smooth manufacturing of PCBA since it stops soldering from taking place on unwanted parts with shorts avoided.

You can check out the PCB Prototype service of PCBWay.com as they do not charge extra fees for different soldermask colors.

A white silkscreen is the final layer on a PCB board. This layer adds labels to the PCB in the form of characters and symbols. This helps to indicate the function of each component on the board.

These materials and components remain largely the same across all PCBs, with the exception of the substrate. The substrate material of a PCB changes according to the specific qualities such as cost and flexibility.

Before the Assembly Process

Before the real PCBA process even begins, a few preparatory steps have to happen. This helps PCB manufacturers assess the functionality of a PCB design, and primarily includes a DFM check.

Most companies specializing in PCB assembly need the design file of the PCB to start out, along with any other design notes and specific requirements.

The DFM check looks at all the design specifications of a PCB. Specifically, this check looks for any missing, redundant or potentially problematic features. Any of these issues may severely and negatively influence the functionality of the final project.

For example, one common PCB design flaw is leaving too little spacing between PCB components. This can result in shorts and other malfunctions.

By identifying potential problems before manufacturing begins, DFM checks can cut manufacturing costs and eliminate unforeseen expenses. This is because these checks cut down on the number of scrapped boards.

The first step of PCB assembly is applying a solder paste to the board.

In this process, a thin, stainless-steel stencil is placed over the PCB. This allows assemblers to apply solder paste only to certain parts of the would-be PCB. Typically these parts are where component pads where the components will sit in the finished PCB.

The solder paste is a paste of small grains of solder mixed with flux. It appears as a grey paste and must be applied to the board at exactly the right places and in precisely the right amounts.

In a professional PCBA line, a mechanical fixture holds the PCB and solder stencil in place. An applicator then places solder paste on the intended areas in precise amounts. The machine then spreads the paste across the stencil, applying it evenly to every open area. After removing the stencil, the solder paste remains in the intended locations.

After applying the solder paste to the PCB board, it is moved on to the pick and place machine, where a robotic device places surface mount components, or SMDs, on the prepared PCB.

In this process, a machine loaded with reels of components picks the components from the reels or other dispensers and places them onto the correct position on the board.

The components placed onto the board are held in place by the tension of the solder paste. This is sufficient to keep them in place provided that the board is not jolted.

In some assembly processes, the pick and place machines add small dots of glue to secure the components to the board.

However, this is normally done only if the board is to be wave soldered. The disadvantage of the process is that any repair is made far more difficult by the presence of the glue, although some glues are designed to degrade during the soldering process.

After the pick and place process is over, the PCB board is transferred to a conveyor belt. This conveyor belt moves through a large reflow oven, which is somewhat like a commercial pizza oven. This oven consists of a series of heaters which gradually heat the board to temperatures around 250 degrees Celsius, or 480 degrees Fahrenheit. This is hot enough to melt the solder in the solder paste.

Once the solder melts, the PCB continues to move through the oven. It passes through a series of cooler heaters, which allows the melted solder to cool and solidify in a controlled manner. This creates a permanent solder joint to connect the SMDs to the PCB.

Many PCBAs require special consideration during reflow, especially for two-sided PCB Assembly. Two-sided PCB assembly needs stenciling and reflowing each side separately. First, the side with fewer and smaller parts is stenciled, placed and reflowed, followed by the other side.

After the board has been passed through the soldering process,  the assembled board needs to be testedor inspected for functionality.

Often, movement during the reflow process will result in poor connection quality or a complete lack of a connection. Shorts are also a common side effect of this movement, as misplaced components can sometimes connect portions of the circuit that should not connect.

Despite upcoming development trend of automated and smart manufacturing, manual checks are still relied on in PCB assembly process. For smaller batches, an in-person visual inspection by a designer is an effective method to ensure the quality of a PCB after the reflow process. However, this method becomes increasingly impractical and inaccurate as the number of inspected boards increases.

An automatic optical inspection machine, also known as an AOI machine, uses a series of high-powered cameras to see PCBs. These cameras are arranged at different angles to view solder connections. Different quality solder connections reflect light in different ways, allowing the AOI to recognize a lower-quality solder. The AOI does this at a very high speed, allowing it to process a high quantity of PCBs in a relatively short time.
• X-ray Inspection:

Another method of inspection involves x-rays. This is a less common inspection method . It is mostly used for more complex or layered PCBs. The X-ray allows a viewer to see through layers and visualize lower layers to identify any potentially hidden problems.

Whether an inspection finds one of these mistakes or not, the next step of the process is to test the part to make sure it does what it’s supposed to do. This involves testing the PCB connections for quality. Boards requiring programming or calibration require even more steps to test proper functionality.

Such inspections can occur regularly after the reflow process to identify any potential problems. These regular checks can ensure that errors are found and fixed as soon as possible, which helps both the manufacturer and the designer save time, labor and materials.

Depending on the type of board under PCBA, the board may include a variety of components apart from the usual SMDs. These include plated through-hole components or PTH components.

A plated through-hole is a hole in the PCB that is plated all the way through the board. PCB components use these holes to pass a signal from one side of the board to the other.

In this case, soldering paste won’t do any good, as the paste will run straight through the hole without a chance to adhere.

Manual through-hole insertion is a straightforward process. Typically, one person at a single station will be tasked with inserting one component into a designated PTH. Once they’re finished, the board is transferred to the next station, where another person is working on inserting a different component. The cycle continues for each PTH that needs to be outfitted. This can be a lengthy process, depending on how many PTH components need to be inserted during one cycle of PCBA.

Wave soldering is the automated version of manual soldering but involves a very different process.

Once the PTH component is put in place, the board is put on yet another conveyor belt. This time, the conveyor belt runs through a specialized oven where a wave of molten solder washes over the bottom of the board. This solders all of the pins on the bottom of the board at once. This kind of soldering is nearly impossible for double-sided PCBs, as soldering the entire PCB side would render any delicate electronic components useless.

After this soldering process is finished, the PCB can move on to the final inspection, or it can run through the previous steps if the PCB needs additional parts added or another side assembled.

After the soldering process is finished, a final inspection will test the PCB for its functionality. This inspection is known as a “functional test”. The test puts the PCB through its paces, simulating the normal circumstances in which the PCB will operate. Power and simulated signals run through the PCB in this test while testers monitor the PCB’s electrical characteristics.

If any of these characteristics, including voltage, current or signal output, show unacceptable fluctuation or hit peaks outside of a predetermined range, the PCB fails the test. The failed PCB can then be recycled or scrapped, depending on the company’s standards.

Testing is the final and most important step in PCB assembly process, as it determines the success or failure of the process. This testing is also the reason why regular testing and inspection throughout the assembly process is so important.