When it comes to the efficiency of PCB manufacturing,  one of the most essential modern  tool that comes into picture is PCB panelization.

The PCB data is sent to the PCB manufacturing company along with a panel design specification after the PCB design is being finalized. This is done to ensure that the format of the received PCB’S are as expected.

PCB panels  make PCB manufacturing more efficient by reducing lead time. However, along with this the proper PCB panel use can also resolve a lot of logistical problems, such as, how to manufacture smaller printed circuit boards or boards with unusual shapes.

PCB panelization also allows manufacturers to reduce labor costs and more easily control the quality of the product when it comes to PCB assembly.

It is the most popular type of panelization as it can be used  in all circumstances.

Which means, this type of panelization is compatible with all circumstances, with no considerations to be taken of SMT manufacturers fabrication conditions and product combination.

However, rotation angle panelization features some disadvantages. Such as, mounting efficiency is possibly decreased after angle rotation. And mounting quality will possibly stay away from stable state. Operating strength of workers will also be increased in terms of visual inspection after assembly since each time has to see a direction change, leading to high probability of mistakes.

Double-side panelization as also another space-saving panelization. Here, we panelize both sides of the PCB on one side as a panel.

Combination panelization is also known as characteristic panelization. In this  type of panelization different types of PCBs are combined together according to combination principles. It is displayed in Figure  below.

This type of panelization is suitable for the manufacturing model containing multiple PCB combinations in products like household appliances and toys. It is also beneficial to production efficiency improvement and cost shrinking so that products turnover and semi-finished products stock can be greatly reduced, which is capable of meeting customers’ requirement of fast shipment.

Panelization also has some restrictions. Such as, the size of whole PCB panel must conform to the manufacturing capabilities of automation equipment including paste printers, SPI equipment, SMT machines, reflow oven, AOI equipment, AI Panasert and wave-solder machines.

The type of the panelization method to be used depends on the design of the board such as how much component clearance is provided on the edges, whether sensitive SMT components are close to an edge, and whether or not connectors or other components hang over an edge.

However, sometimes a combination of methods is used to secure the PCB-array strength, while providing a viable breakout method.

Along with the  handling consideration it is also important to consider the followings during the panelization :

There are three panelization methods out of which only two are commonly practiced. They are:

This is a common method of panelization in which  individual PCBs  are separated with V-shaped grooves.

These grooves remove approximately 1/3 rd of the board’s thickness from the top and bottom of the board with a 30- to 45-degree circular cutting blade.

A machine is commonly used  to depanel it, as the remaining 1/3 of the board thickness left intact is surprisingly very strong, and breaking it off by hand would put severe stress on the PCB. 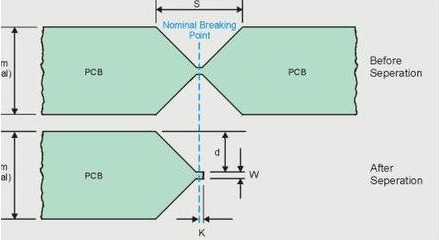 V-groove panelization method is the most preferred method due to its efficiency and reduction in surface stress.

Depaneling machines for this type of array are also relatively inexpensive and cost-efficient. and also they are portable and require minimal maintenance.

Though the method tends to result in rougher board edges, this is rarely a concern.

PCB arrays that can not  use a V-groove method will instead use a tab routing method.

In this method, PCBs are pre-cut from the array and held in place on the board with perforated tabs.

Three to five holes are often used in these perforation patterns.

This method is often beneficial for its ability to support designs with edge-hanging components. It can also be broken by hand instead of using any tools. 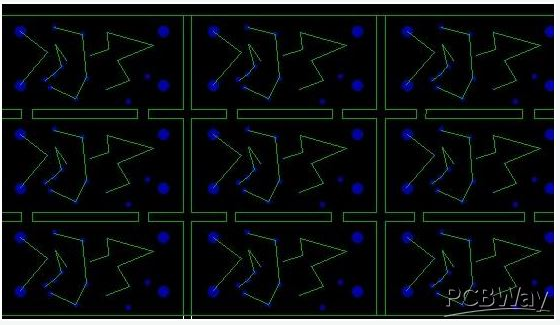 Panels can be designed with solid tabs between each board, thus improving the overall strength.

However, the depaneling method for this type of panel requires either a depaneling router, a laser-cutting machine or a hook-shaped blade tool.

The router can result in dust and vibration, while the laser-cutter is extremely expensive and ineffective on boards over 1mm thick. The hook-bladed option is less expensive but inefficient and prone to blade rotation.

This method tends to be less common than the other two.

V-Score and Tab Routing are the preferred panelization methods for most applications.

The most important thing for PCB designers is to understand which of the two methods is best for their application. The next step is to design their array for maximal strength and breakout success.

PCB array designs have a massive impact on the success or failure of the individual components and the overall cost of the project.  Hence choosing the right PCB panelization services is very important. That’s where PCBWay can help you.

PCBWay.com is one of the most experienced PCB manufacturing company based in China with an experience of more than a decade in the field of PCB prototype and fabrication. If you would prefer PCBWay can take care of all the panelizing you need for your project.