A Phase-Locked Loop (PLL) is basically a negative feedback system. It consists of three major components such as re multiplier, a loop filter and a voltage controlled oscillator (VCO) connected together in the form of a feedback loop.

A VCO is a sine wave generator whose frequency is determined by the voltage applied to it from an external source. It means that any frequency modulator can work as a VCO.

A phase-locked loop (PLL) is primarily used in tracking the phase and frequency of the carrier component of an incoming FM signal.

This means that, PLL is most suitable for use in space vehicle-to-earth data links or where the loss along the transmission line or path is quite large.

Recently, it has found application in commercial FM receivers.

The block diagram of a PLL is shown in fig.1 below.

Fig.1: The block diagram of a Phase-Locked Loop (PLL)

The operation of a PLL is similar to any other feedback system where the feedback signal tends to follow the input signal.

The difference signal between s(t) and b(t) is called an error signal.

A PLL operates on a similar principle except for the fact that the quantity feedback is not the amplitude, but a generalized phase Φ(t).

The error signal or difference signal e(t) is utilized to adjust the VCO frequency in such a way that the instantaneous phase angle comes close to the angle of the incoming signal s(t).

At this point, the two signals s(t) and b(t) are synchronized and the PLL is locked to the incoming signal s(t).

Here, we have assumed that the VCO is adjusted initially so that when the control voltage comes to zero, the following two conditions are satisfied:

(ii) The VCO output has a 90° phase-shift w.r.t. the unmodulated carrier wave.

Let the input signal applied to the PLL be an FM wave. It is defined as ,

Let the VCO output be defined by,

where Av = Amplitude of VCO output when the control voltage applied to the VCO is denoted by v(t), then, we have

Here, kv is the frequency sensitivity of VCO, measured in Hertz/volt.

It may be observed from equations (1) and (3) that the VCO output and the incoming signals are 90° out of phase, while the VCO frequency in absence of v(t) is precisely equal to the unmodulated frequency of the FM signal.

The incoming FM have s(t) and the VCO output b(t) are applied to a multiplier.

The output of the multiplier has the following components:

(i) A high frequency component represented by,

where km = Multiplier Gain measured in per volt.

where  Φe(t) is the phase error and is expressed as,

The loop filter operates on error signal e(t) to produce the output v(t). It is given by,

where h(t) = Impulse response of the low-pass filter (LPF).

Now, differentiating both sides of equation (8), we get,

Here, ko has the dimension of frequency. On the basis of equation (9), we can construct and equivalent model of PLL as shown in fig.2 below. 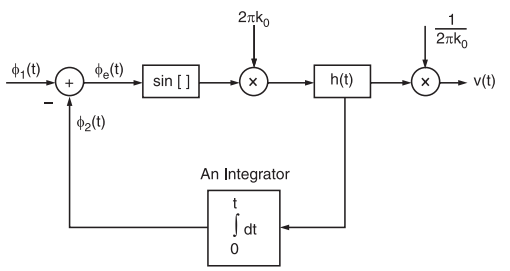 In this model, v(t) and e(t) are also included utiliZing the relationship between them as given in equations,

If we compare fig.1 and fig. 2, we can see that they are similar except for the fact that the multiplier in the equivalent model has been replaced by a subtractor and a sinusoidal non-linearity and the VCO by an integrator.

It is almost accurate as long as Φe(t) is less than 0.5 radian. In this case, PLL is said to be Near-Lock Condition and the sinusoidal non-linearity can be discarded.

The linearized model of PLL is valid under above-mentioned condition as shown in fig.3. 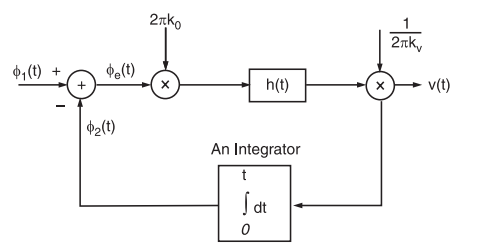 In this model, phase error Φe(t) is related to the input phase Φ1(t) by the Integro-differential equation. It is expressed as,

Taking the Fourier transform of both sides of equation (10), we get,

The quantity ko(H(f)/ jf is called the open loop transfer function of the PLL.

Substituting L(f) in the previous equation (10), we get,

Now, let us consider that for all values of frequency f inside the baseband signal, we make the magnitude of L(f) very large compared to unity. Thus, from equation (10) we get,