Resistors in Series and Parallel Combinations

In our previous post about resistors , we studied about different types of resistors.

In some cases when we do not get the desires or specific resistor values we have to either use variable resistors such as potentiometers or presets to obtain such precise values. However,  such pots are too expensive to use for every case.

Another method to do this,  is to combine two or more resistors to obtain the necessary precise values.Such resistor combinations cost very less.

Now the question arises as to how one should combine these resistors.

The resistors  can be combined in two different ways such as :

Resistors are said to be connected in “Series“, when they are daisy chained together in a single line.

Calculating values for two or more resistors in series is simple, just add all the values up.

The  series connection ensures that the SAME current flows through all resistors.

In this type of connection R Total  will always be GREATER than any of the included resistors.

The total resistance is the sum of all the resistors connected in series and is given by the expression  : 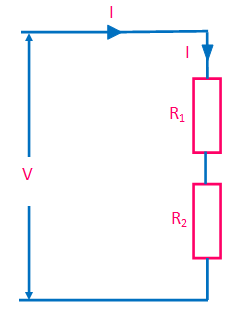 This total resistance is generally known as the Equivalent Resistance and can be defined as;  “a single value of resistance that can replace any number of resistors in series without altering the values of the current or the voltage in the circuit“.

The series connection can be  characterized by the following points :

Since the series resistors divide voltage, this idea an be used to get smaller voltage from a power supply output.

For example, we have a power supply with 10V fixed output. But we want only 5V from it. How to get it ? 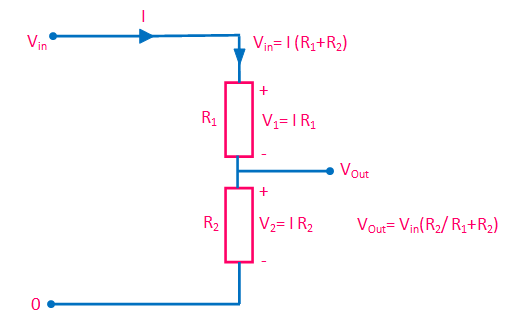 The circuit shown above consists of  two resistors, R1 and R2 connected together in series across the supply voltage Vin.

The current I is given by:

Since the current I flows through   R1 as well as R2, hence, by using Ohm’s law, the voltage developed across R2 is given by :

If more resistors are connected in series to the circuit then different voltages will appear across each resistor in turn with regards to their individual resistance  values providing different but smaller voltage points from one single supply.

Resistors are said to be connected together in “Parallel” when both of their terminals are respectively connected to each terminal of the other resistor or resistors.

The fig. below shows the circuit of resistors in parallel combination where two resistors R1 and R2  are connected in parallel across the supply voltage E . 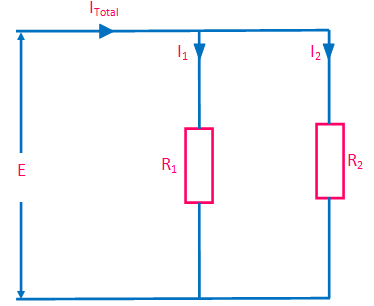 As we can see from the fig. above :

Currents in a Parallel Resistor Circuit

In a parallel resistor circuit the voltage remains same across each resistor connected in parallel. However,  the current through each parallel  resistor is not necessarily the same since the value of the resistance in each branch determines the current within that branch.

The total current, ITotal  in a parallel resistor circuit is the sum of the individual currents flowing in all the parallel branches which can be determined by using Ohm’s law. 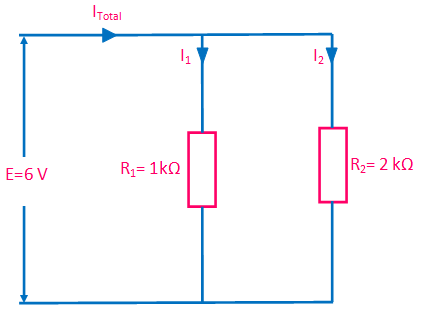 6 V will generate 9 mA only when the total resistance of the circuit is equal to :

Hence the effective resistance of  R1 and  R2 connected in parallel is 0.66 kΩ.

This effective resistance can also be calculated by using the  formula as below :

Thus the parallel connection can be characterized by :

Resistors in Series and Parallel Combinations

In some electrical and electronic circuits it is required to connect various resistors together in “BOTH” parallel and series combinations within the same circuit and produce more complex resistive networks.

Now the question arises, how do we calculate the combined or total circuit resistance, currents and voltages for these resistive combinations.

Resistor circuits that combine series and parallel resistors networks together are generally known as Resistor Combination or mixed resistor circuits.

The method of calculating the circuits equivalent resistance is the same as that for any individual series or parallel circuit.

Let us consider the circuit shown in fig. below : 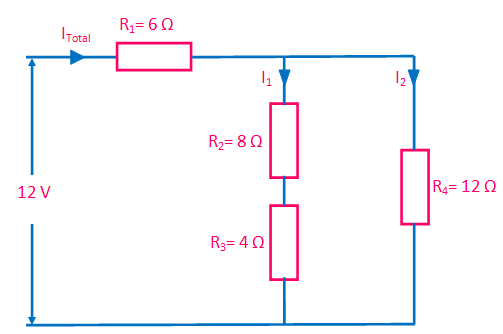 In the above circuit  let us calculate the total current ( IT ) taken from the 12 v supply.

We can see that the two resistors, R2 and R3 are actually connected in a “SERIES” combination so we can add them together to produce an equivalent resistance.  The resultant resistance for this combination would therefore be:

So we can replace both resistor R2 and R3 above with a single resistor of resistance value 12 Ω as shown in fig. below: 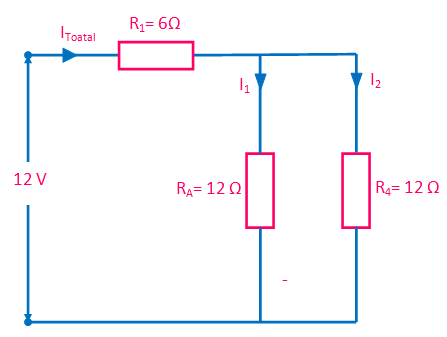 So our circuit now has a single resistor RA in “PARALLEL” with the resistor R4. Using our resistors in parallel equation we can reduce this parallel combination to a single equivalent resistor value of R(combination) using the formula for two parallel connected resistors as follows.

The resultant resistive circuit now looks something like this: 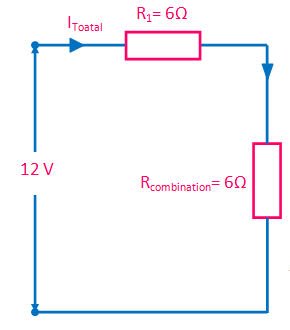 We can see that the two remaining resistances, R1 and R(combination) are connected together in a “SERIES” combination and again they can be added together (resistors in series) so that the total circuit resistance therefore given as:

A single resistance of just 12 Ω can be used to replace the original four resistors connected together in the original circuit.

Now by using Ohm’s law, the value of the circuit current ( I) is simply calculated as: