Fig.1 shows the circuit diagram of a diode ring modulator . 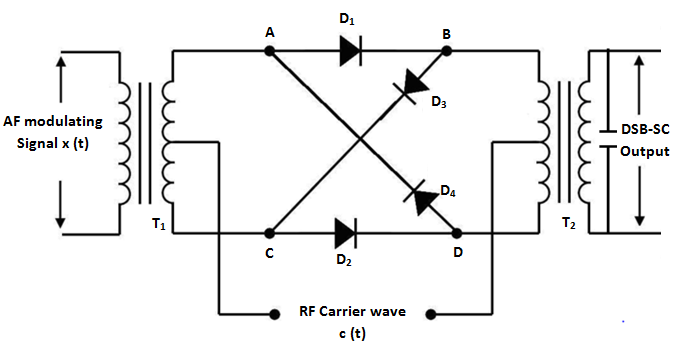 The carrier signal is assumed to be a square wave with frequency fc  and it is connected between the centre taps of the two transformers .

The DSB-SC output is obtained at the secondary of the RF transformer T2 .

The operation of the ring modulator is explained with the assumptions that the diodes act as perfect switches and that they are switched ON  and OFF by the RF carrier signal . This is because the amplitude and frequency of the carrier is higher than that of the modulating signal .

To understand how carrier suppression takes place, let us assume that the modulating signal is absent and only the  carrier signal is applied.

(i) Operation in the Positive half-cycle of Carrier

The equivalent circuit for this mode of operation is shown in fig.2 .

We can observe that the direction of currents flowing through the primary windings of output transformer  T2  are equal and opposite to each other .

Therefore, the magnetic fields produced by these currents are equal and opposite and cancel each other .

Hence, the induced voltage in secondary winding is zero . Thus, the carrier is supported in the positive half-cycle .

(ii) Operation in the Negative half-cycle of Carrier

In this mode also let us assume that the modulating signal is zero .

In fig.3 , the currents flowing in the upper and lower halves of the primary winding of T2 are again equak and in opposite directions . This cancels the magnetic fields as explained in mode 1 (i) .

Thus, the output voltage in this mode also is zero .

Thus, the carrier is suppressed in the negative half-cycle as well .

It is important to note that the perfect cancellation of the carrier will take place if and only if he characteristics of the diodes are perfectly matched and the centre tap is placed exactly at the centre of the primary transformer T2  .

Now, let us discuss the operation  when RF carrier and modulating signal both are applied .

(i) Operation in the positive half-cycle of Modulating Signal

In the positive half-cycle of the carrier, D1  and  D2 are ON and secondary of T1 is applied as it is across the primary of T2. Hence, during the positive half cycle of carrier, the output of T2 is positive as shown in fig.4 (a) . 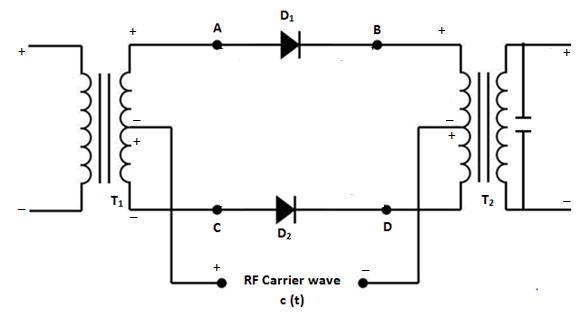 In the negative half-cycle of the carrier,  the diodes D3  and  D4 are turned ON and the secondary of  T1 is applied in a  reversed manner across the primary of T2 as shown in equivalent circuit of fig. (b) .

(ii) Operation in the Negative half-cycle of Modulating Signal

When modulating signal reverses the polarities, the operation of the circuit is same as that in the positive half-cycle discussed earlier . 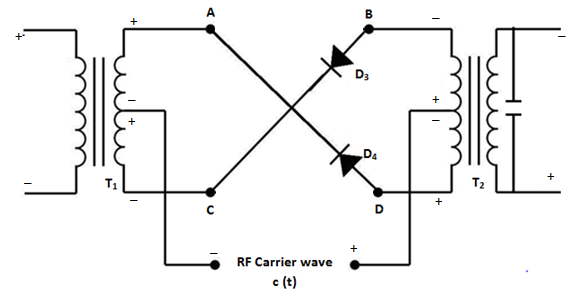 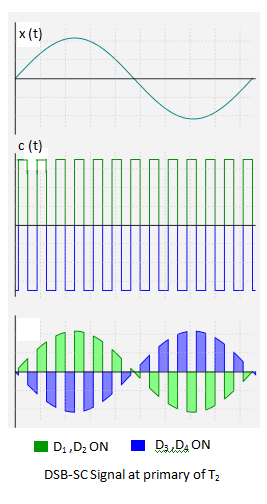 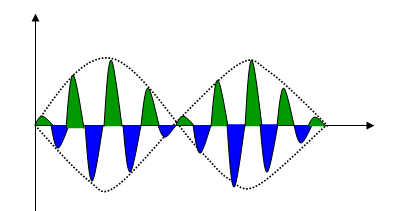 Thus, the ring modulator is an ideal form of product modulator and hence it produces the desired DSB-SC output .

The square-wave carrier signal can be represented by the Fourier series as under :

hence, the Ring-modulator output is given by :

It may be noted that there is no output from the modulator at carrier frequency . Therefore, the carrier is entirely eliminated .