sampling of the signals is the fundamental operation in signal-processing.

A continuous time signal is first converted to discrete-time signal by sampling process.

The number of samples to be taken depends on maximum signal frequency present in the signal.

Sampling theorem gives the complete idea about the sampling of signals.

Let us discuss the sampling theorem first and then we shall discuss different types of sampling processes.

The statement of sampling theorem can be given in two parts as:

(i) A band-limited signal of finite energy, which has no frequency-component higher than fm Hz, is completely described by its sample values at uniform intervals less than or equal to 1/ 2fm second apart.

(ii) A band-limited signal of finite energy, which has no frequency components higher than fm Hz, may be completely recovered from the knowledge of its samples taken at the rate of  2fm samples per second.

The first part represents the representation of the signal in its samples and minimum sampling rate required to represent a continuous-time signal into its samples.

Combining the two parts, the sampling theorem may be stated as under:

To prove the sampling theorem, we need to show that a signal whose spectrum is band-limited to fm Hz, can be reconstructed exactly without any error from its samples taken uniformly at a rate fs > 2 fm Hz.

Let us consider a continuous time signal x(t) whose spectrum is band-limited to fm Hz. This means that the signal x(t) has no frequency components beyond fm Hz. 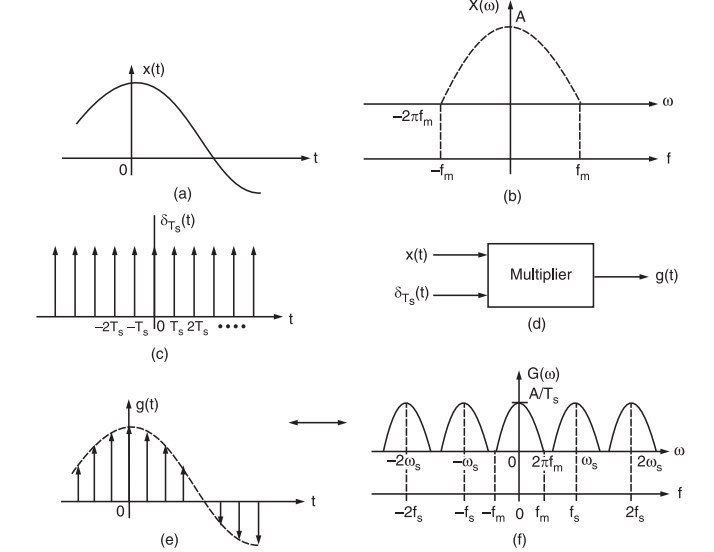 Let X(ω) represents its Fourier transform or frequency spectrum as shown in fig.1(b).

Fig.1(c) shows this impulse train. This multiplication results in the sampled signal g(t) shown in fig.1(d).

Putting the values of δTs(t) from equation (2) in equation (1), the sampled signal can be written as,

Now, if have to reconstruct x(t) from g(t), we must be able to recover X(ω) from G(ω). This is possible if there is no overlap between successive cycles of G(ω). Fig.1 (f) shows that this requires,

Therefore, as long as the sampling frequency fs is greater than twice the maximum signal frequency fm (signal bandwidth, fm), G(ω) will consist of non-overlapping repetitions of X(ω). If this is true, fig.1 (f) shows that x(t) can be recovered from its samples g(t) by passing the sampled signal g(t) through an ideal low-pass filter (LPF) of bandwidth fm Hz. This proves the sampling theorem.