In this tutorial we’ll write simple client-server programs that use UDP.

We know that processes running on different machines communicate with each other by sending messages into sockets. We said that each process is analogous to a house and the process’s socket is analogous to a door. The application resides on one side of the door in the house; the transport-layer protocol resides on the other side of the door in the outside world. The application developer has control of everything on the application-layer side of the socket; however, it has little control of the transport-layer side.

We’ll use the following simple client-server application to demonstrate socket programming for both UDP and TCP:

The figure below (2.28) highlights the main socket-related activity of the client and server that communicate over the UDP transport service. 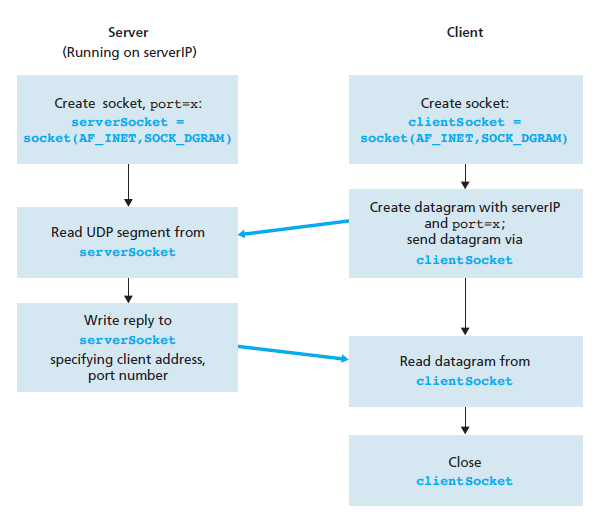 Now let’s get out hands dirty and take a look at the client-server program pair for a UDP implementation of this simple application. We also provide a detailed, line-by-line analysis after each program. We’ll bring with the UDP client, which will  send a simple application-level message to the server. In order for the server to be able to receive and reply to the client’s message, it must be ready and running – that is, it must be running as a process before the client sends its message.

The client program is called UDPClient.py, and the server program is called UDPServer.py. In order to emphasize the key issues, we intentionally provide code that is minimal. “Good code” would certainly have a few more auxiliary lines, in particular for handling error cases. For this application, we have arbitrarily chosen 12000 for the server port number.

Here is the code for the client side of the application:

The socket module forms the basis of all network communications in Python. By including this line, we will be able to create sockets within our program.

This line creates the client’s socket, called clientSocket. The first parameter indicates the address family; in particular , AF_INET indicates that the underlying network is using IPv4. (DO not worry about this now – we will discuss IPv4 in Module 4). The second parameter indicated that the socket is of type SOCK_DGRM, which means it is a UDP socket (rather than a TCP socket). Note that we are not specifying the port number of the client socket when we create it; we are instead letting the operating system do this for us. Now that the client process’s door has been created, we will want to create a message to send through the door.

raw_input() is a built-in function in Python. When this command is executed, the user at the client is prompted with the words “Input data:” The user then uses her keyboard to input a line, which is put into the variable message. Now that we have a socket and a message, we will want to send the message through the socket to the destination host.

In the above line, the method sendto() attaches the destination address (serverName, serverPort) to the message and sends the resulting packet into the process’s socket, clientSocket. (As mentioned earlier, the source address is also attached to the packet, although this is done automatically rather than explicitly by the code). Sending a client-to-server message via a UDP socket is that simple! After sending the packet, the client waits to receive data from the server.

With the above line, when a packet arrives from the internet at the client’s socket, the packet’s data is put into the variable modifiedMessage and the packet’s source address is put into the variable serverAddress. The variable serverAddress contains both the server’s IP address and the server’s port number. The program UDPClient doesn’t actually need this server address information, since it already knows the server address from the outset; but this line of Python provides the server address nevertheless. The method recvfrom also takes the buffer sixe 2048 as input. (This buffer size works for most purposes).

This line prints out modifiedMessage on the user’s display. It should be the original line that the user typed, but now capitalized.

This line closes the socket. The process then terminates.

Let’s now take a look at the server side of the application:

Note that the beginning of UDPServer is similar to UDPClient. It also imports the socket module, also sets the integer variable serverPort to 12000, and also creates a socket of type SOCK_DGRM (a UDP socket). The first line of code that is significantly different from UDPClient is :

The above line blinds (that is, assigns) the port number 12000 to the server’s socket. Thus in UDPServer, the code (written by the application developer) is explicitly assigning a port number to the socket. In this manner, when anyone sends a packet to port 12000 at the IP address of the server, that packet will be directed to this socket. UDPServer then enters a while loop; the while loop will allows UDPServer to receive and process packets from clients indefinitely. In the while loop, UDPServer waits for a packet to arrive.

This line of code is similar to what we saw in the UDPClient. When a packet arrives at the server’s socket, the packet’s data is put into the variable message and the packet’s source address is put into the variable clientAddress. The variable clientAddress contains both the client’s IP address and the client’s port number. Here, UDPServer will make use of this address information, as it provides a return address, similar to the return address with ordinary postal mail. With this source address information, the server now knows to where it should direct its reply.

This line is the heart of our simple application. It takes the line sent by the client and uses the method upper()  to capitalize it.

This last line attaches the client’s address (IP address and port number) to the capitalized message, and sends the resulting packet into the server’s socket. (As mentioned earlier, the server address is also attached to the packet, although this is done automatically rather than explicitly by the code). The internet will then deliver the packet to this client address. After the server sends the packet, it remains in the while loop, waiting for another UDP packet to arrive (from any client running on any host).

To test the pair of programs, you install and compile UDPClient.py in one host and UDPServer.py in another host. Be sure to include the proper hostname or IP address of the server in UDPClient.py. Next, you execute UDPServer.py, the compiled client program, in the client. This creates a process in the client. Finally, to use the application at the client, you type a sentence followed by a carriage return.

To develop your own UDP client-server application, you can begin by slightly modifying the client or server programs. For example, instead of converting all the letters to uppercase, the server could count the number of times the letter s appears and return this number. Or you can modify the client so that after receiving a capitalized sentence, the user can continue to send more sentences to the server.