Q1. For the circuit shown in Fig.1 (i), find : (i) the output voltage (ii) the voltage drop across series resistance (iii) the current through zener diode. 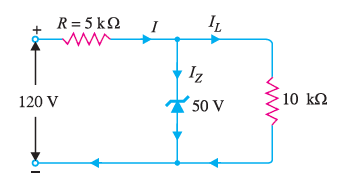 If you remove the zener diode in Fig. 1, the voltage V across the open-circuit is given by : 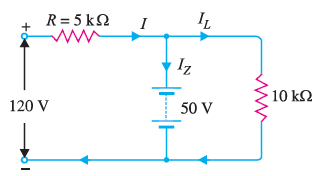 Q2. For the circuit shown in Fig. 2 (i),find the maximum and minimum values of zener diode current.

The first step is to determine the state of the zener diode. It is easy to see that for the given range of voltages (80 − 120 V), the voltage across the zener is greater than VZ (= 50 V). Hence the zener diode will be in the “on” state for this range of applied voltages. Consequently, it can be replaced by a battery of 50 V as shown in Fig. 2(ii).

Maximum zener current:  The zener will conduct maximum current when the input voltage is maximum i.e. 120 V. Under such conditions :

Minimum Zener current: The zener will conduct minimum current when the input voltage is
minimum i.e. 80 V. Under such conditions, we have,

Q3. A 7.2 V zener is used in the circuit shown in Fig. 3 and the load current is to vary from 12 to 100 mA. Find the value of series resistance R to maintain a voltage of 7.2 V across the load. The input voltage is constant at 12V and the minimum zener current is 10 mA.

If R = 43.5 Ω is inserted in the circuit, the output voltage will remain constant over the regulating range. As the load current IL decreases, the zener current IZ will increase to such a value that IZ + IL = 110 mA.

Note that if load resistance is open-circuited, then IL = 0 and zener current becomes 110 mA.

Q5. A 10-V zener diode is used to regulate the voltage across a variable load resistor [See fig.5]. The input voltage varies between 13 V and 16 V and the load current varies between 10 mA and 85 mA. The minimum zener current is 15 mA. Calculate the value of series resistance R.

Q6. The circuit of Fig. 6 uses two zener diodes, each rated at 15 V, 200 mA. If the circuit is connected to a 45-volt unregulated supply, determine :(i) The regulated output voltage (ii) The value of series resistance R.

When the desired regulated output voltage is higher than the rated voltage of the zener, two or more zeners are connected in series as shown in Fig. 6. However, in such circuits, care must be taken to select those zeners that have the same current rating.

Q7. What value of series resistance is required when three 10-watt, 10-volt, 1000 mA zener diodes are connected in series to obtain a 30-volt regulated output from a 45 volt d.c. power source ?

Fig. 7 shows the desired circuit. The worst case is at no load because then zeners carry the maximum current.

Q8. Over what range of input voltage will the zener circuit shown in Fig. 8 maintain 30 V across 2000 Ω load, assuming that series resistance R = 200 Ω and zener current
rating is 25 mA ?

The minimum input voltage required will be when IZ = 0. Under this condition,

Q9. In the circuit shown in Fig.9,the voltage across the load is to be maintained at 12 V as load current varies from 0 to 200 mA. Design the regulator. Also find the  maximum wattage rating of zener diode. 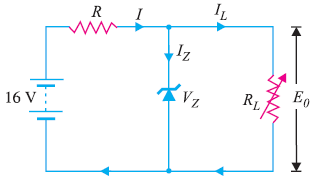 By designing the regulator here means to find the values of VZ and R. Since the load voltage is to be maintained at 12 V, we will use a zener diode of zener voltage 12 V i.e.,

Maximum power rating of zener is

Q10. Fig. 10 shows the basic zener diode circuits. What will be the circuit behaviour if the zener is (i) working properly (ii) shorted (iii) open-circuited? 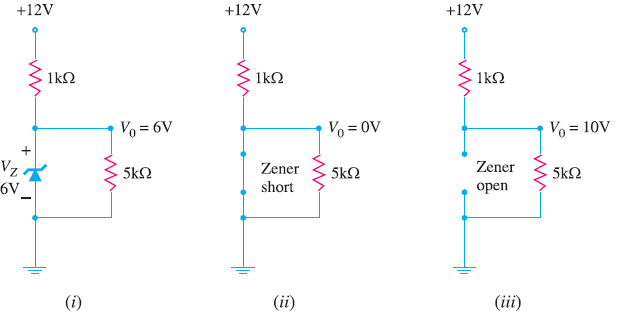 Zener diodes cannot be tested individually with a multimeter. It is because multimeters usually do not have enough input voltage to put the zener into breakdown region.

(i) When filter capacitor shorts :