In this article we will have a detailed study of number systems, their presentation and conversion from one number system to another.

A number system is a code that uses symbols to count the number of items.

The decimal number system is the most commonly and widely used number system. It uses the symbols 0,1,2,3,4,5,6,7,8 and 9. Thus, the decimal system has ten digits for counting the items.

Since there are ten digits in this group, we say the number system has a base or radix of 10. In the decimal number system, numbers greater than 9 are represented by repeatedly using these digits in a definite order, as illustrated below:

Consider the decimal number 754. We may write this as (754)10, where the subscript 10 shows that 754 is a decimal number. This is a short form of writing, which may be expanded as:

Larger numbers can be expressed similarly by writing them as coefficients of the powers of ten.

Consider an ordinary electric switch. As we know that this switch has two states of operations: ON and OFF. If we assign 0 to the OFF – state and 1 to the ON- state, then we can use the switch to represent the numbers system, which has digit 0 and 1 as its basic members. This number system, which has 0 and 1 as its basic members, is known as the binary number system.

The decimal equivalent of this number is obtained by converting the powers of 2 to their decimal values. Thus;

Using this procedure we can convert any binary number into its equivalent decimal number.

Conversion from Decimal into Binary:

There are two methods for converting decimal numbers into their corresponding binary numbers.

Example : Convert the decimal number 29410 into its binary number equivalent.

Solution: Divide the given number repeatedly by 2.

In each division, if the number is exactly divisible by 2, we put a 0 as remainder against the number on its right-hand side.

If the number is not exactly divisible by 2, we put a 1 as the remainder.

We proceed like this up to the last digit.

Then we read upwards as shown by the direction of arrow, to get the required binary number.

To solve the problem by tabulation method, we write the numbers in a horizontal manner, as shown below. We write 88 in the right-most position of the first row.

We then process in the direction of arrow shown, and divide each number by 2.

If the number is fully divisible by 2, we write 0 (otherwise a 1) below each number.

We proceed until the last digit is arrived at.

The desired binary number can now be read from left to right as 1011000.

The numbers after the point symbol are expanded by using negative powers of 10. By using a similar method, we can express binary fractions.

The decimal equivalent of this binary then becomes 5.6875

The point symbol in the binary system is called as the binary point or radix point.

Conversion of Decimal Fraction into Binary

Just as we divide a decimal whole number by the factor 2 to get its binary-equivalent, to get the corresponding binary fraction we multiply the decimal fraction by 2. If the product of each number is greater than 1, we put a 1 below that number; otherwise we put a 0. This is shown in the following example.

The octal number system contains the whole numbers from 0 to 7. In this system, the base or radix is 8.

Then, converting octal to decimal shows that  1278 in its Octal form is equivalent to 8710 in its Decimal form.

Conversion of Decimal into Octal:

In this post, we will see the step-by-step procedure to convert given decimal number to its equivalent in the octal number system.

As discussed earlier, we will implement the same division method used earlier, to convert decimal to octal and all the steps will be very much similar to the steps shown in decimal to binary conversion except for the change in the radix from 2 to 8 since here the target number system is octal number system.

Conversion of Octal into Binary:

To convert an octal number into its corresponding binary, first we have to convert it into its decimal equivalent and then the decimal number is converted into binary.

Now (87)10  is converted into binary as described above.

This procedure is lengthy and time consuming. So there is an easy and faster method to convert octal to binary.

For this, first we write the octal number with some spacing between the digits as :

Now, below each number, we write its binary equivalent in 3bit form. We then get

Finally combining all the bite, we have

Conversion of Binary into Octal

Solution: Proceeding as described above, we first divide the number into groups of 3 bits each.

So we have the following groups:

We  now add zeros before the left-most 1 to complete the groupings, and write the corresponding decimal numbers below each group. Thus, we get

Octal fractions can be obtained by using procedures similar to those developed for binary fractions.

Conversion of Decimal Fraction into Octal

The conversion is done as shown in the following table. We have divided the number into its integral and fractional parts. 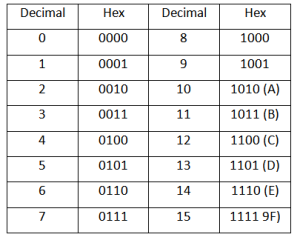 Conversion of Decimal into Hexadecimal

Conversion of Hex into Direct Binary and Back

As we take group of 3 bits for octal, so for hex, groups of 4 bits are taken.

For hex, groups of 4 bits are taken as