Tombstoning is one of the many issues that Rush PCB and other PCB assemblers face during the soldering process of PCBs. This is a common issue most PCB manufacturers face. As contract manufacturers, we usually inform the customer about tombstoning, but it is important to know what it is and how to prevent it.

Tombstoning occurs in PCBs using surface mount passive components like capacitors and resistors. Typically, the component has one end soldered to the pad, while the other end lifts at an angle. Sometimes, the component stands on one of its ends and looks like a tombstone in a graveyard—hence the name. This is a serious issue, as the PCB assembly is non-functional because of the open circuit. 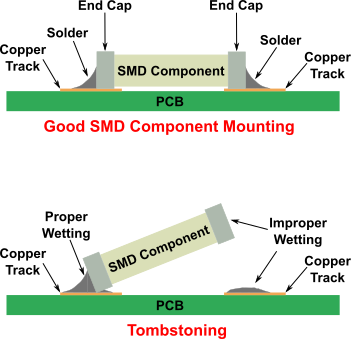 The angle of the lifted component may vary, but that does not matter. The PCB remains non-functional until an operator has reworked the affected component. Tombstoning is a potential quality issue, as the PCB requires post-soldering rework and the customer must bear the expenses.

Rush PCB has identified two primary factors that have increased the occurrences of Tombstoning. These are:

However, the wetting process may be unequal for the two pads. One of the pads may have solder paste heating and cooling at a different rate than that on the other. On one pad, the solder paste may melt before the paste on the other pad can. The molten solder exerts a surface tension pull on the component, while the other side has no such pull.

The one-sided pull on the component tilts and lifts the other end from the board. The effect is more pronounced on lighter and smaller components, as the size and weight of a large component can effectively counter the one-sided pull, preventing the lift.

Therefore, the most common causes of tombstoning can include:

How to Prevent Tombstoning?

Although a part of the problem of tombstoning depends on uneven temperatures in a reflow oven, the design of the PCB plays a greater part. To reduce the chances of tombstoning, there are a few things a PCB designer must take care of:

It is easy to mess up pad dimensions during the process of creating footprints. The most likely mistake could be to make one of the pads larger or smaller than the others. The extra copper acts as a heat sink during the reflow process, soaking up heat while the solder is melting, thereby slowing down the melting process. Again, during the cooling process, the extra copper gives up its heat, slowing down the solidification process. This causes unequal wetting on the component, increasing the chances of tombstoning.

The designer must follow the specifications that the component manufacturers offers in their data-sheets. The designer may also use the IPC-7351B footprint calculator for calculating the land patterns precisely based on the actual dimensions of the component.

The tombstoning problem is more pronounced on smaller components such as of size 0402 and 0201. Rather than the traditional Hot Air Solder Leveling or HASL on boards with such small components, a different surface finish may help.

Although HASL is the usual industry norm for surface finish because of its low cost and wide availability, HASL also causes uneven surface finish impacting the solder wetting process. Better alternatives would be immersion tin, OSP, or immersion gold, depending on design constraints.

For small pads, the tracks can have a profound effect even with their different orientation. It is preferable to ensure that the tracks connect to the pads in similar orientation, either in the X- or in the Y-direction. This prevents variable heat dissipation with differently angled tracks. 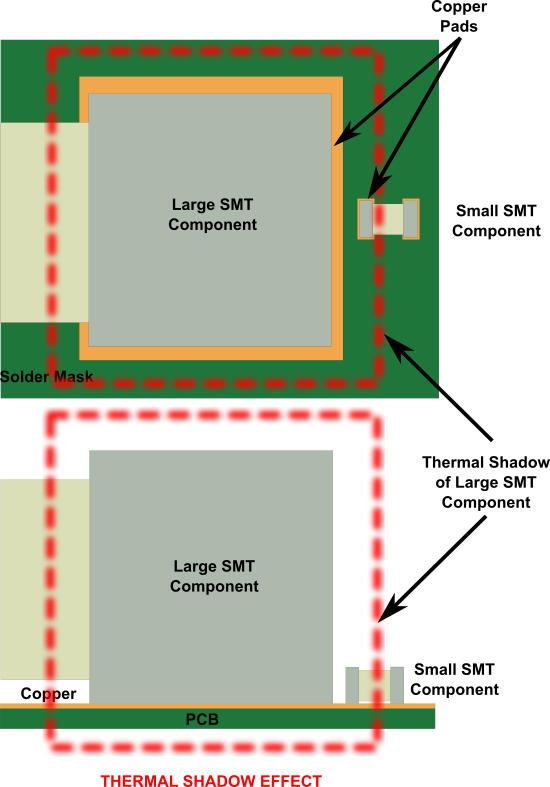 The presence of a large copper land near one of the pads of an SMT component may also increase the chances of tombstoning on that component. The large copper land, either on the same plane or an inner plane also acts as a heat sink, delaying the soldering process on one of the nearby pads.

Designers must ensure that copper land covers both sides of a component equally, even when the copper land is on a different layer. 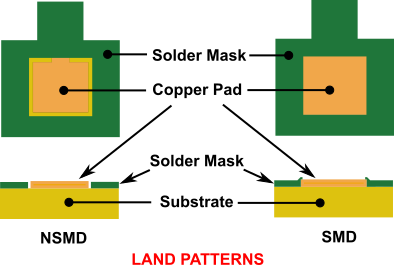 For an NSMD pattern, the solder mask opening is marginally larger than the actual pad size. This ensures the designer makes both pads of the same size, thereby reducing the chances of tombstoning.

RUSHPCB.COM has vast experience in designing circuit boards and fabricating PCBs for various industries. We have tried to provide a guideline on preventing tombstoning that will help our customers avoid this issue.