These devices are larger than monolithic ICs but smaller than discrete circuits. These ICs can be used when power requirement is comparatively higher. With a thin- or thick-film IC, the passive components like resistors and capacitors are integrated, but the transistors and diodes are connected as discrete components to form a complete circuit. Therefore, commercially available thin- and thick-film circuits are combination of integrated and discrete components.

The essential difference between the thin- and thick-film ICs is not their relative thickness but the method of deposition of film. Both have similar appearance, properties and general characteristics.

Thin-film ICs are fabricated by depositing films of conducting material on the surface of a glass or ceramic base. By controlling the width and thickness of the films and by using different materials selected for their resistivity, resistors and conductors are fabricated. Capacitors are produced by sandwiching a film of insulting oxide between two conducting films. Inductors are made by depositing a spiral formation of film. Transistors and diodes can be produced by thin-film technology; but usually tiny discrete components are connected into the circuit.

Thick-film ICs are sometimes referred to as printed thin-film circuits. In their manufacturing process silk-screen printing techniques are used to create the desired circuits pattern on a ceramic substrate.  The screens are actually made of fine stainless steel wire mesh, and the inks are pastes having conductive, resistive, or dielectric properties. After printing, the circuits are high temperature-fired in a furnace to fuse the films to the substrate. Thick-film passive components are fabricated in the same way as those in thin-film circuits. As with thin-film circuits, active components are added as separate devices. A portion of thick-film circuit is given in fig 1. 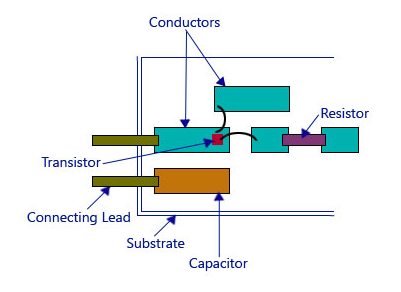 ICs produced by thin- or thick-film techniques have the advantages of forming passive components with wider range and better tolerances, better isolation between their components, greater flexibility in circuit design and of providing better high-frequency performance than monolithic ICs.

However, such ICs suffer from the drawbacks of larger physical size, comparatively higher cost and incapability of fabrication of active components.