A printed circuit board (PCB) is the board base for physically supporting and wiring the surface-mounted and socketed components in most electronics.

It is a thin board made of fiberglass, composite epoxy, or other laminate material. Conductive pathways are etched or “printed” onto the board, connecting different components on the PCB, such as transistors, resistors, and integrated circuits.

PCBs can be customized for any specifications to user requirements. It can be found in many electronic devices like; TV, Mobile, Digital camera, Computers parts like; Graphics cards, Motherboard, etc. It also used in many fields like; medical devices, industrial machinery, automotive industries, lighting, etc.

There are several types of PCB, each with their own particular manufacturing specifications, material types and usages available for the circuit. Out of these types of PCB, we have to choose the appropriate type of PCB according to our application.

Single layer PCBs also known as single sided PCBs are the simple and most used PCBs. These PCBs are easy to design and manufacture.

It is made out of a single layer of base material or substrate.

One side of this PCB is coated with a thin layer of any conducting material.

Generally, copper is used as conducting material for PCB, because of its very good conducting characteristic.

Once the copper base plating is applied, a layer of solder mask is used to protect the PCB against oxidation followed by silk screen to mark out all of the components on the PCB.

In this type of PCB, only one side of the PCB is used to connect different types of electrical or electronics components like resistor, capacitor, inductor, etc, which are soldered onto one side.

These PCBs are used in low cost and bulk manufacturing application like calculators, radio, printers and the solid-state drive.

But despite this low cost, they’re used infrequently because of their inherent design limitations.

Double-layer PCB also known as double-sided PCB has a thin layer of conducting material, like copper applied to both top and bottom sides of the board.

The circuits and components of a double-layer PCB board are usually connected in one of two ways: either utilizing a through-hole or with the use of a surface-mount.

A through-hole connection means that small wires, known as leads, are fed through the holes, with each end of the leads then soldered to the right component.

Surface mount PCBs don’t utilize wires as connectors. Instead, many small leads are soldered directly to the board, which means the board itself is used as a wiring surface for the different components.

This allows circuits to be completed using less space, freeing up space to allow the board to complete more functions, usually at higher speeds and a lighter weight than a through-hole board would allow.

Multilayer PCBs consist of more than two layers. It means that, this type of PCB has at least three conductive layers of copper.

These boards are then secured together with a specialized glue and sandwiched between the layers of insulation to ensure that excess heat doesn’t melt and thereby damage any component of the circuit.

Multi-layer PCBs come in a variety of sizes, going as small as four layers or as large as ten or twelve. The largest multi-layer PCB ever built was 50 layers thick.

Due to design complexity, these type PCBs are used in very complicated and large electrical task in very low space and compact circuit.

Rigid PCBs are made out of solid substrate material which does not allow PCBs from twisting. The most common example of a rigid PCB is a computer motherboard. The motherboard is a multilayer PCB designed to allocate electricity from the power supply while simultaneously allowing communication between all of the many parts of the computer, such as CPU, GPU, and RAM.

This PCB cannot be bent according to the shape of the base that’s why this PCB is known as RIGID PCB.

The lifespan of this type of PCB is very high, so this is used in many parts of the computer like RAM, GPU, and CPU.

Due to simplicity in design, these are the most used and most manufacture PCB.

Unlike rigid PCBs, which use unmoving materials such as fiberglass, flexible PCBs are made of materials that can flex and move, such as plastic.

The circuit board is generally placed in folded or twisted.

Flexible PCBs offer many advantages over rigid PCBs. The most prominent of these advantages is the fact that they are flexible. This means they can be folded over edges and wrapped around corners.

Their flexibility can lead to cost and weight savings since a single flexible PCB can be used to cover areas that might take multiple rigid PCBs.

Like rigid PCBs, flexible PCBs come in single, double or multilayer formats. As they need to be printed on a flexible material, they tend to cost more for fabrication.

Flex-rigid PCBs combine the best of both Flexible PCBs and Rigid PCBs.

Flex-rigid PCBs have many advantages over just using rigid or flexible PCBs for certain applications.

For example, rigid-flex boards have a lower parts count than traditional rigid or flexible boards because the wiring options for both can be combined into a single board.

The combination of rigid and flexible boards into a single rigid-flex board also allows for a more streamlined design, reducing the overall board size and package weight.

Flex-rigid PCBs are most often found in applications where space or weight are prime concerns, including Cell phones, Digital cameras, Pacemakers, and Automobiles. 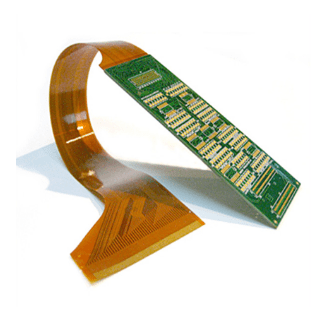