The Volt-Ampere or V-I characteristics of a p-n junction diode is basically the curve between voltage across the junction and the circuit current.

Usually voltage is taken across x-axis and current along y-axis.

Fig.1 shows the circuit arrangement for determining the V-I characteristics  of a p-n junction diode.

When the external voltage is zero, i.e. circuit is open  at K, the potential barrier at the junction does not permit current flow. Therefore, circuit current is zero as indicated by point O in fig.2. 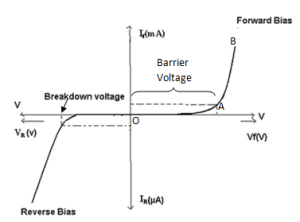 At some forward voltage (0.7 V for Si and 0.3 V for Ge), the potential barrier is altogether eliminated and current starts flowing in the circuit.

From now onwards, the current increases with the increase in forward voltage. Thus a rising curve OB is obtained with forward bias as shown in fig.2.

From the forward characteristics, it is seen that at first (i.e region OA ), the current increase very slowly and curve is non-linear. It is because the external applied voltage is used to overcome the potential barrier.

However, once the external applied voltage  exceeds the potential barrier voltage, the p-n junction behaves like an ordinary conductor. Therefore, current rises very sharply with increase in voltage (region AB). The curve is almost linear. 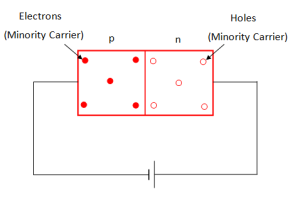 Therefore, the junction resistance becomes very high and practically no current flows through the circuit.

However, in practice, a very small current (of the order of μA) flows in the circuit with reverse bias as shown in fig.3.

In n-type and p-type semiconductors, very small number of minority charge carriers is present. Hence, a small voltage applied on the diode pushes all the minority carriers towards the junction.

Thus, further increase in the external voltage does not increase the electric current.

To the free electrons in p-type and holes in n-type, the applied reverse bias appears as forward bias. Therefore, a small current flows in the reverse direction.

However, if the voltage applied on the diode is increased continuously, the kinetic energy of minority carriers may become high enough to knock out electrons from the semiconductor atom. At this stage breakdown of the junction occurs. This is characterized by a sudden rise of reverse current and a sudden fall of the resistance of barrier region. This may destroy the junction permanently.