Virtual circuit and datagram networks are computer networks that provide connection oriented and connectionless services respectively. Let’s try to understand what they mean.

Virtual circuit and datagram networks are two fundamental classes of computer networks. They use very different information in making their forwarding decision. Let’s now take a closer look at their implementations.

While the internet is a datagram network, many alternative network architectures – including those of ATM (Asynchronous  Transfer Mode) and frame relay – are virtual circuit networks and, therefore, use connections at the network layer. These network layer connections are called virtual circuits (VCs). Let’s now consider how a VC service can be implemented in a computer network.

A VC consists of :

To illustrate the concept, consider the network shown in the figure below:

The numbers next to links of R1 in the above figure are the link interface numbers. Suppose now that Host A requests that the network establish a VC between itself and Host B. Suppose also that the network chooses the path A-R1-R2-B and assigns VC numbers 12, 22, and 32 to the three links in this path for this virtual circuit. In this case, when a packet in this VC leaves Host A, the value in the VC number filed in the packet header is 12; when it leaves R1, the value is 22; and when it leaves R2, the value is 32.

Whenever a new VC is established across a router, an entry is added to the forwarding table. Similarly, whenever a VC terminates, the appropriate entries in each table along its path are removed.

You might be wondering why a packet doesn’t just keep the same VC number on each of the links along its route. The answer is twofold. First, replacing the number from the link reduces the length of the VC field in the packet header. Second, and more importantly, VC setup is considerably simplified by permitting a different VC number at each link along the path of the VC. Specifically, with multiple VC numbers, each link in the path can choose a VC number independently of the VC numbers chosen at other links along the path. If a common VC number were required for all links along the path, the routers would have to exchange and process a substantial number of messages to agree on a common VC number (e.g. one that is not being used by any other existing VC at these routers) to be used for a connection.

There are three identifiable phases in a virtual circuit:

The message that the end systems send into the network to initiate or terminate a VC, and the message passed between the routers to set up the VC (that is, to modify connection state in router tables ) are known as signalling messages, and the protocols used to exchange these message are often referred to as signalling protocols. VC setup is shown in the figure above.

In a datagram network, each time an end system wants to send a packet, it stamps the packet with the address of the destination end system and then pops the packet into the network. As shown in the figure below , there is no VC setup and routers do not maintain any VC state information (because there are no VCs).

To get some further insight into the lookup operation, let’s look at a specific example. Suppose that all destination addresses are 32 bits (which just happens to be the length of the destination address in an IP datagram). A brute-force implementation of the forwarding table would have one entry for every possible destination address. Since there are more than 4 billion possible addresses, this option is totally out of the question.

Now, let’s further suppose that our router has four links, numbered 0 through 3, and the packets are to be forwarded to the link interfaces as follows : 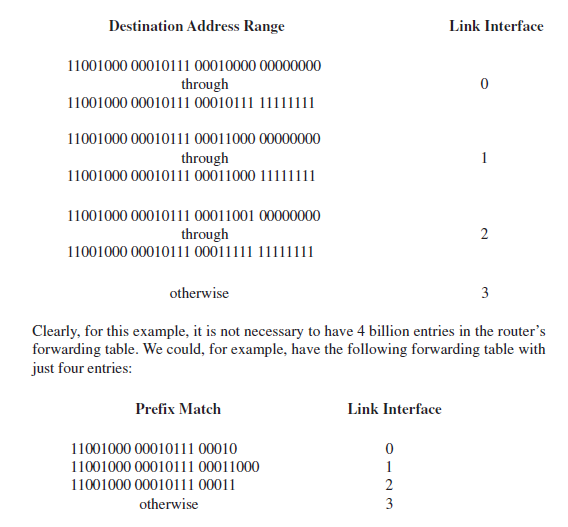 With this style of forwarding table, the router matches a prefix of the packet’s destination address with the entries in the table; if there’s a match, the router forwards the packet to a link associated with the match.

Because forwarding tables in datagram networks can be modified at any time, a series of packets sent from one end system to another may follow different paths through the network and may arrive out of order.