Band gap of a semiconductor

Each isolated carbon (group 4 element) atom has an electronic structure 1s2 2s2 2p2 in the ground state. Each atom has two 1s states, two 2s states, six 2p states, and higher states. If we consider N atoms, there will be 2N, 2N, and 6N states of the type 1s, 2s and 2p, respectively. As the interatomic spacing decreases these energy levels split into bands, beginning with the outer (n=2) shell. A the “2s” and “2p” bands grow, they merge into a single band composed of a mixture of energy levels. This band of “2s-2p” levels contains 8N available states. As the distance between atoms approaches the equilibrium interatomic spacing diamond this band splits into two bands separated by an energy gap Eg. The upper band (called the conduction band) contains 4N states, as does the lower (valence) band. In diamond crystal since there are 4N available electrons at the outer shell they will occupy 4N lower (valence) band states and upper (conduction) band 4N states are empty in normal situations. 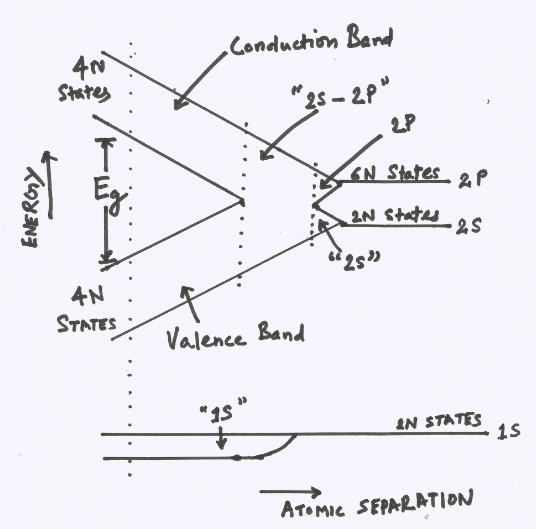