This pass band is called the bandwidth of the filter.

The system so developed will be capable of transmitting frequencies between fL and fH and attenuate all other frequencies below fL and above fH and  this new type of passive filter arrangement is commonly known as a Band Pass Filter or BPF .

The circuit of a R-C band pass filter is shown in fig. below :

The pass band or bandwidth of this filter is given by :

The values of fL and fH are given by the following equations : 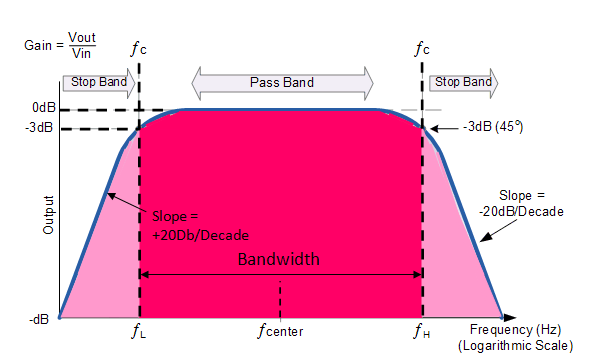 The Bode Plot or frequency response curve of band pass filter is shown in the above fig.

Here the signal is attenuated at low frequencies with the output increasing at a slope of +20dB/Decade (6dB/Octave) until the frequency reaches the “lower cut-off” point ƒL. At this frequency the output voltage is again 1/√2 = 70.7% of the input signal value or -3dB (20 log (Vout/Vin)) of the input.

The output continues at maximum gain until it reaches the “upper cut-off” point ƒH where the output decreases at a rate of -20dB/Decade (6dB/Octave) attenuating any high frequency signals.

The point of maximum output gain is generally the geometric mean of the two -3dB value between the lower and upper cut-off points and is called the “Centre Frequency” or “Resonant Peak” value ƒr. This geometric mean value is calculated as being ƒr 2 = ƒH x ƒL.

A band pass filter is regarded as a second-order (two-pole) type filter because it has “two” reactive components within its circuit structure, then the phase angle will be twice that of the previously seen first-order filters, ie, 180o. The phase angle of the output signal LEADS that of the input by+90o up to the centre or resonant frequency, ƒr point were it becomes “zero” degrees (0o) or “in-phase” and then changes to LAG the input by -90o as the output frequency increases.