The band stop filter blocks signals falling within a certain frequency band set up between two points while allowing both the lower and higher frequencies either side of this frequency band.

It is formed by the combination of low pass and high pass filters with a parallel connection instead of cascading connection.

Since it eliminates frequencies, it is also called as band elimination filter or band reject filter or notch filter. 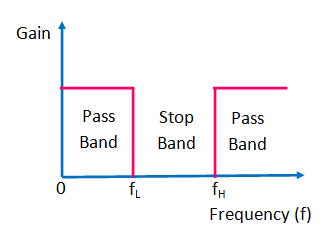 fL indicates the cut off frequency of the low pass filter.

fH is the cut off frequency of the high pass filter.

The circuit of a R-C band stop filter is shown below.

Such a filter attenuates the electric signal over a specified frequency range from fL to fH and below fL and above fH has all pass band region.

The R-C band stop filter frequency response curve is shown in fig. below. 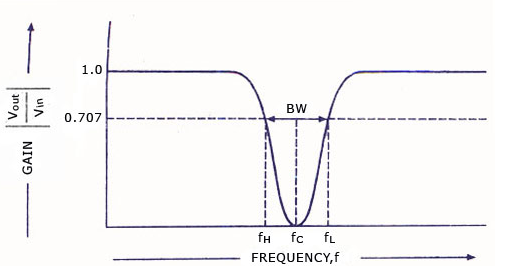 The stop band is represented by the group of frequencies that lies between fL and fH where response is below -60 dB.

The cutoff frequencies are given as :