Fig.1  shows the block diagram of a differential amplifier .

There are two input voltages  v1 and v2.

This amplifier amplifies the difference between the two input voltages.

Therefore the output voltage is,

Where A is the voltage gain of the amplifier.

Fig.2 (i)  shows the basic circuit of a differential amplifier. 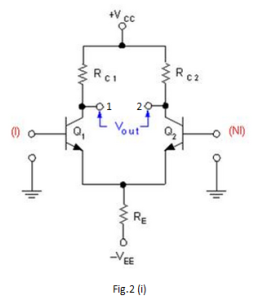 It consists of two transistors Q1 and Q2 that have identical (ideally) characteristics.

The following points may be noted about the differential amplifier :

4.   We can take output from DA in the following two ways :

5.   Generally the differential amplifier (DA) is operated for single-ended output.

For simplicity, we shall discuss the operation of single-ended input and double-ended output DA. 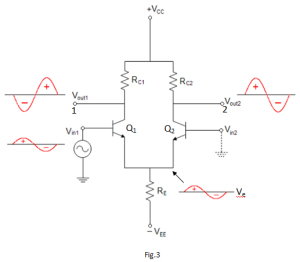 As a common emitter amplifier, the input signal to Q1 will appear at output 1 (i.e. collector of Q1) as amplified inverted signal.

As a common collector amplifier, the signal appears on the emitter of Q1 in phase with the input and only slightly smaller.

Since the emitters of Q1 and Q2 are common, the emitter signal becomes input to Q2.

Therefore, Q2 functions as a common base amplifier.

Now suppose the signal is applied to input 2 (i.e. base of transistor Q2) and input 1 is grounded. 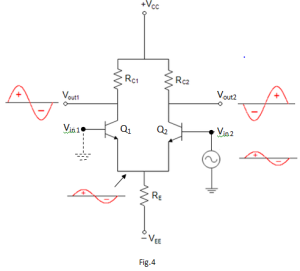