A digital storage oscilloscope can be explained as an oscilloscope which stores and analyses the signal digitally instead of using analogue techniques.

Digital oscilloscopes are now the major form of oscilloscope that is available on the test equipment market, because of the advanced trigger, storage, display and measurement features .

These scopes may be referred to as digital oscilloscope or digital storage oscilloscope. Although these two names used to indicate separate types of instrument, they are often used interchangeably.

Analogue storage scopes were not particularly effective, and therefore there was a need for effective storage technologies.

The original digital storage scopes had analogue input stages, and then converted the signals into a digital format to enable them to be stored in digital memory. They could then be processed before being converted back into an analogue format for display on a cathode ray tube.

As technology progressed, the storage facility was retained, but the whole scope became digital.

For a while, there was a difference between standard digital scopes and those with a storage capability, but this difference was gradually overcame as the facility became incorporated on all digital oscilloscopes.

Accordingly the two types are effectively the same, and the names are often used interchangeably to describe the same type of test instrument.

The basic mechanism behind digital oscilloscopes / DSOs is the conversion of the incoming analogue signal into a digital format where it can be processed using digital signal processing techniques.

When the signal enters the scope it is first pre-conditioned by some analogue circuits to ensure that the optimum signal is presented to the next stage.

This next stage,  an analog-to-digital converter( ADC) takes samples at discrete regular time intervals and  the acquisition of the digital samples takes place . 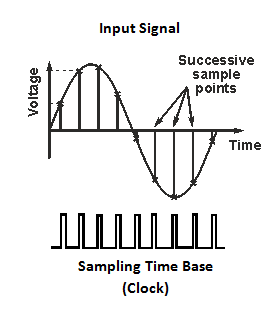 The times and  the rate at which samples are taken is determined by the system clock.

The waveform record is initiated by the trigger and again stopped by the timebase circuit after the given amount of time.

The waveform record is then processed by the processing circuitry and presented to the display for visual inspection by the user. 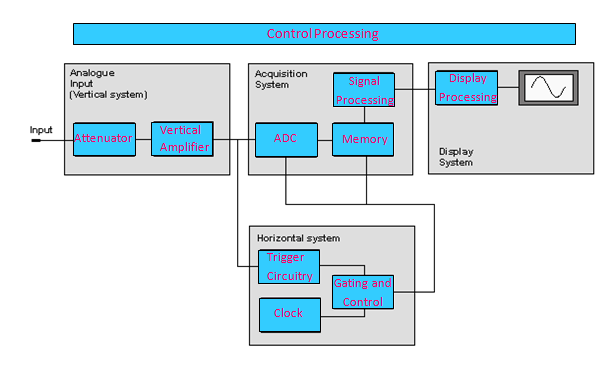