What Is A Zener Diode

When the reverse bias voltage on a normal crystal diode is increased, a point known as Knee point is reached at a  voltage known as breakdown voltage, when the  reverse current increases sharply to a high value. This breakdown voltage is also known as  Zener Voltage and the sharp increase in current is known as Zener current.

A zener diode is always used in reverse biased state. It  has sharp breakdown voltage known as Zener voltage  VZ. When forward biased ,it behaves just like ordinary crystal diode. Fig(2)  shows the characteristics of a zener diode. 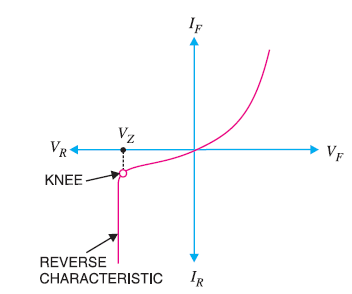 Equivalent Circuit of  a Zener Diode

When the reverse voltage across a zener diode is equal to or higher than the breakdown voltage VZ , the current increase very sharply.

In this state, voltage across the zener diode is constant at VZ irrespective of the change in current though it.

Therefore, in breakdown region an ideal zener diode acts as a battery of voltage  VZ , and the zener diode is said to be in “ON” State.

A zener diode can be used as a voltage stabiliser or voltage regulator to provide a constant voltage from a source whose voltage may vary over a particular range. 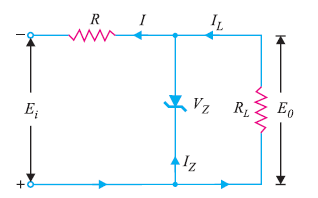 The circuit connection is shown in fig(5).

The zener diode of zener voltage  VZ is connected reversly across the load resistance  RL across which constant output voltage EO is required.

When the circuit is properly designed, the output voltage EO remains constant even though the input voltage  Ei and load resistance RL may vary over a wide range. 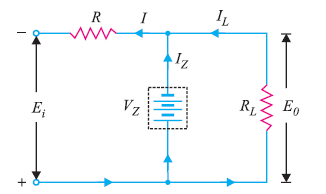 Suppose the input voltage Ei increases, since the zener is in the breakdown region, the zener diode is equivalent to a battery of voltage VZ and the output voltage remains constant at VZ ( EO =VZ).

The excess voltage is dropped across R. This will cause an increase in the value of total current I. The zener will conduct the increase of current in I, while the load current remains constant.

Since zener is in breakdown region, VZ remains constant

So I increases, since   IL remains constant, IZ increases

Since the zener diode is in breakdown region , voltage across it will remain constant at   VZ.

As the output voltage EO is equal to the zener  voltage, So EO will also remain constant at VZ.

When RL  decreases ,in order  to maintain EO constant, current through the load resistance  IL  will increase.

Since Ei is constant, total current  I is also constant. So the increase in load current IL will come from a decrease in zener current IZ  .