The oscillator does not create energy, but it acts as an energy converter. It receives d.c. energy and changes it into a.c. energy of desired frequency. The frequency of the oscillations depends upon the constants of the device.

Although oscillations can be produced by mechanical devices such as alternators, but electronic oscillators have the following advantages: 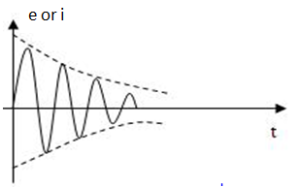 The oscillator which generates these oscillations, losses some energy during each oscillation. As no means are provided to compensate for these losses,hence the amplitude of the generated wave decreases gradually.

It can be noted that the frequency of oscillations remains unchanged since it depends upon the constant of the electrical system. 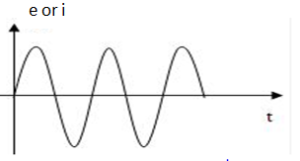 Although the electrical system in which these oscillations are being generated has also losses, but now right amount of energy is being supplied to overcome the losses. Hence, the amplitude of the generated wave remains constant.

An oscillator is mainly required to produce undamped oscillations for utilizing in various electronics equipment.

A circuit which produces electrical oscillations of any desired frequency is known as oscillatory circuit or tank circuit.

A simple oscillatory circuit consists of a capacitor (C) and inductance coil (L) in parallel as shown in fig.2(i). 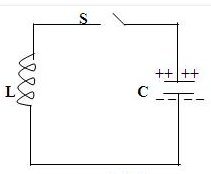 This electrical system can produce electrical oscillations of frequency determined by the values of L and C. 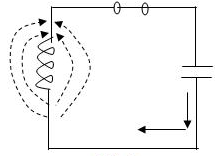 (iii) Once the capacitor is discharged, the magnetic field will begin to collapse and produce a counter e.m.f. This counter e.m.f will keep the current flowing in the same direction. The result is that the capacitor is now charged with opposite polarity, making upper plate of capacitor negative and lower plate positive as shown in fig.2(iii). 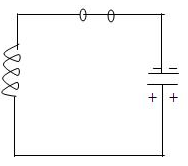 (iv) After the collapsing field has recharged the capacitor, the capacitor now begins to discharge; current now flowing in the opposite direction. fig.2(iv) shows capacitor fully discharged and maximum current flowing. 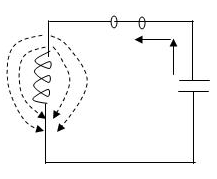 The sequence of charge and discharge results in alternating motion of electrons or an oscillating current.

The energy is alternately stored in the electric field of the capacitor C and the magnetic field of inductance coil L.

This interchange of energy between L and C is repeated over and again resulting in the production of oscillations.

In a practical tank circuit there are resistive and radiation losses in the coil and dielectric losses in the capacitor. During each cycle, a small part of the originally imparted energy is used up to overcome these losses. The result is that the amplitude of oscillating current decreases gradually and eventually it becomes zero. Therefore, the tank circuit by itself will produce damped oscillations as shown in fig.3. 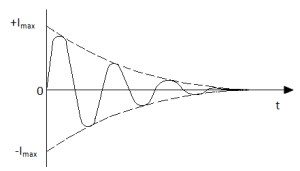 The frequency of oscillations in the tank circuit is the resonant frequency given by:

Thus any energy which would be applied to the circuit must have a polarity conforming to the existing polarity  at the instant of application of energy.

If the applied energy is of opposite polarity, it would oppose the energy in the tank circuit, causing stoppage of oscillations.

Therefore, in order to make the oscillations in the tank circuit undamped, the following conditions must be fulfilled:

If the conditions are fulfilled, the circuit will produce continuous undamped output as shown in fig.4. 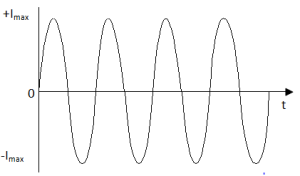