The term channel means the medium through which the message travels from the transmitter to the receiver.

In other words, we can say that the function of the channel is to provide a physical connection between the transmitter and the receiver.

Depending on the mode of transmission, we may classify the communication channels into following two categories .

The classification of channels has been shown in fig.1.

Some of the important characteristics of a channel are as under :

It is designed for providing service to voice signals such as telephones. The telephone channels are also used for the worldwide internet connection. Therefore, telephone channel is the best possible option for the data transmission over long distances.

The amplitude response is flat over the entire passband as shown in fig.2.

However, no particular attention is given to the phase response because human ears are not very sensitive to the phase delay variations.

But the data and images (pictures) are strongly affected by the phase delay variations. Therefore, for digital transmission over the telephone channels, it is essential to use an equalizer as shown in fig.3 (a) .

As shown in fig.3 (b) , the equalizer maintains a flat amplitude response and linear phase response over the passband. Also the telephone channel is a bandwidth limited channel. 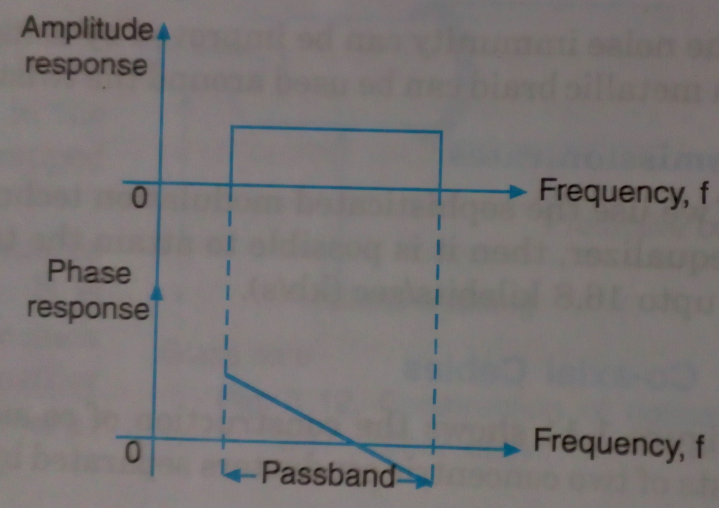 Fig. 3 (b) Amplitude and phase response of the telephone channel with equalizer 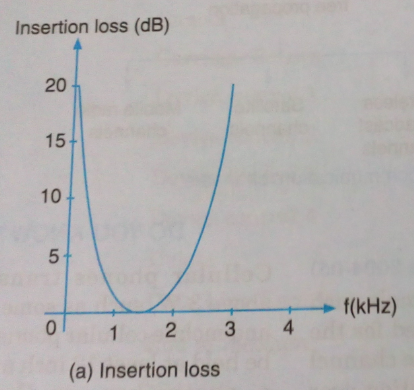 Insertion loss may be defined as :

where P0 = load power from a source to load via channel

PL = load power when the load is connected directly to source

An envelope delay is defined as the negative of the phase response with respect to ω =2πf . 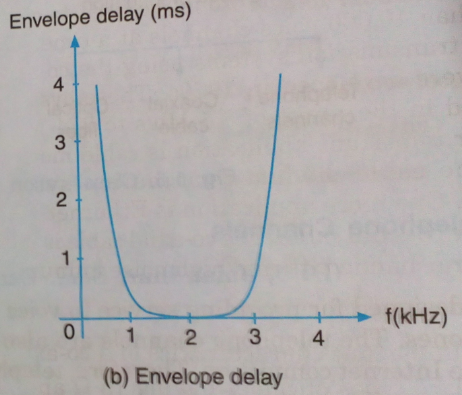 The telephone channels are built using the twisted pair of wires.The construction of twisted pair cables has shown in fig.5.

This is also commonly used medium and it is quite cheaper than the co-axial cable.

A twisted pair consists of two insulated conductor twisted together in the spiral form as shown on fig.5 .

It can be shielded or un-shielded.

The un-shielded twisted pair cables are very cheap and easy to install. However, they are badly affected by the noise interference .

The noise immunity can be improved by using shielded twisted pair cable.

As shown in fig.6, a metallic braid can be used around the twisted pair.  Protective plastic coating is then provided .

If we use the sophisticated modulation techniques along with equalizer, then it is possible to attain the transmission rates upto 16.8 kilobits/sec (kb/s). 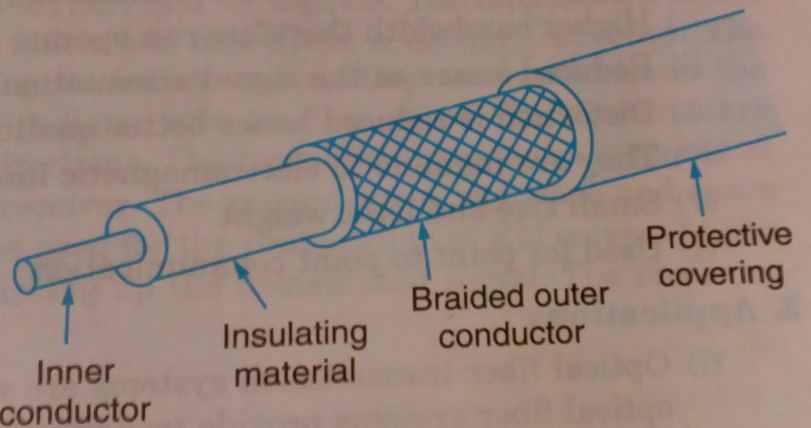 Fig.7  Construction of a co-axial cable

It consists of two concentric conductors separated by a dielectric material. The external conductor is metallic braid and used for the purpose of shielding. The co-axial cable may contain one or more co-axial pairs.

An important application of co-axial cable is  cable modem, with the cable modem termination system(CMTS).

One more application is Ethernet LAN using the co-axial cable.

The co-axial cable is used for its large bandwidth and high noise immunity .

The important characteristics of a co-axial cable are :

The construction of an optical fiber cable is shown in fig.8. 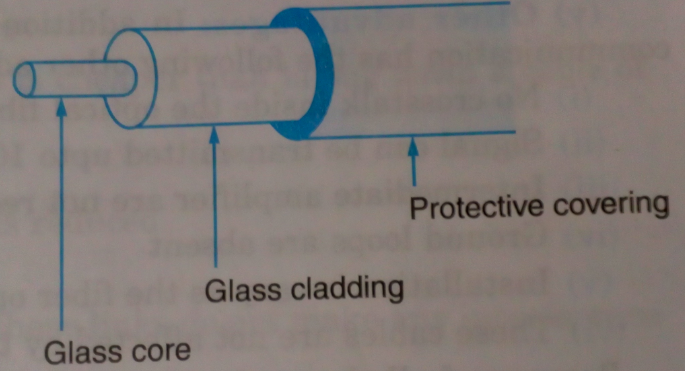 It consists of an inner glass core surrounded by a glass cladding which has a lower refractive index.

Digital signals are transmitted in the form of intensity-modulated light signal which is trapped in the glass core.

Light is launched into the fiber using a light source such as a LED or laser.

It is detected on the other side using a photo detector such as a phototransistor.

(i) Small size and light weight : The size (diameter) of the optical fibers is very small  (it is comparable to the diameter of human hair). Therefore, a large number of optical fibers can fit into a cable of small diameter.

(ii) Easy availability and low cost : The material used for the manufacturing of optical fibers is silica glass. This material is easily available. Hence, the optical fibers cost lower than the cables with metallic conductors.

(iv) Large bandwidth : As the light rays have a very high frequency in the GHz range, the bandwidth of the optical fiber is extremely large. This allows transmission of more number of channels. Therefore, the information carrying capacity of an optical fiber is much higher than that of a co-axial cable.

(i) Sophisticated plants are required for manufacturing optical fiber.

(iii) Joining the optical fibers is a difficult job.

These channels are used for the transmission of radio and TV signals.

The information signal which represents the speech, music etc. modulates a carrier frequency.

The carrier frequency is different for every transmitting station.

A transmitting antenna radiates the modulated signal in the form of electromagnetic radiation into the free space.

These waves are radiated in all directions or in some specified directions.

The transmitting antenna is mounted on a tower or a hall in order to reach the farther receiver.

The ground wave, sky wave and space wave are three types of propagation techniques used for the propagation of EM waves.

The receivers are superheterodyne type.

This is actually a type of point to point wireless communication.

Although any wire communication systems use copper wire or optical fiber, some just send the signal into the air. This happens when infrared, lasers, microwaves and radio are used for the transmission of data, as they do not need any physical medium.

For long distance communication, microwave radio transmission is widely used as an alternative to coaxial cable.

The signal transmission takes place in the form of electromagnetic waves which have wavelengths of few centimeters.

Parabolic antennas can be mounted on the towers to send a beam of waves to another antenna, tens of kilometers away.

The transmitting and receiving antennas are highly directional to enable point to point communication.

This system is widely used for both telephone and television transmission.

The higher this tower which holds the antenna, the greater is the coverage. With a 100 meter high tower, the distance of 100 km can be easily covered.

Generally, the microwave transmission takes place at frequencies between 2 and 40 GHz. This will correspond to a wavelength of 15 cm to 0.75 cm .

In mobile communication, the sender and the receiver  both are allowed to move with respect to each other.

The radio propagation takes place due to scattering of EM waves from the surface of the surrounding buildings and diffraction over and around them. Hence, the transmitted energy reaches the receiver via multiple paths. This is called as multi path communication.

The total signal strength at the receiver is equal to the vector sum of all the signals.

Therefore it keeps changing continuously. Hence, mobile channels are called as the linear time varying channels and it is statistical in nature.

They use low gigahertz frequencies and line of sight communication.

These systems use satellites which are in the geostationary orbit (36000 km above the earth) .

The satellites act as repeaters with receiving antennas, transponder and transmitting antenna.

Satellite microwave systems can reach the most remote places on earth and communicate with mobile devices.

This systems work in the following way : signal is sent through cable media to an antenna which beams the signal to the satellite, the satellite then transmits the signal back to another location on earth as shown in fig.10 . 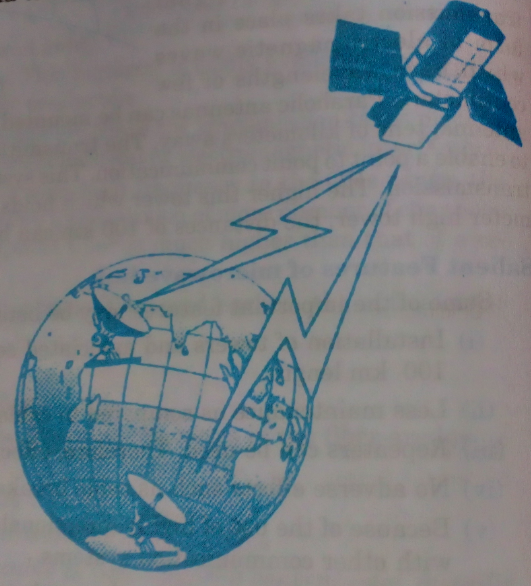 Satellite microwave systems experience delays between the transmission of a signal and its reception back to the earth (540 ms).