Where Is Link Layer Implemented

For the most part, the link layer is implemented in a network adapter, also sometimes known as a Network Interface Card (NIC).

Until the late 1990s most network adapters were physically separate cards (such as PCMCIA card or a plug-in card fitting into a PC’s PCI card slot) but increasingly, network adapters are being integrated onto the host’s motherboard – a so called LAN-on-motherboard configuration.

On the sending side, the controller takes a datagram that has been created and stored in host memory by the higher layers of the protocol stack, encapsulates the datagram in a link layer frame (filling in the frame’s various fields), and then transmits the fame into the communication link, following the link access protocol. On the receiving side, a controller receivers the entire frame, and extracts the network layer datagram. If the link layer performs error detection , then it is the sending controller that sets the error detection bits in the frame header and it is the receiving controller that performs the error detection.

The figure below show a network adapter attaching to a host’s bus (e.g. a PCI or PCI-X bus), where it looks much like any other I/O device to the other host components. 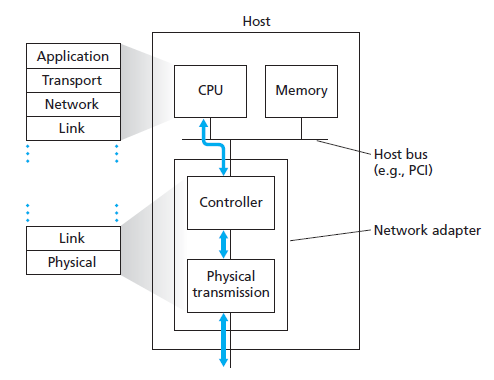 On the receiving side, link layer software responds to controller interrupts (e.g. due to the receipt of one or more frames), handling error conditions and passing a datagram up to the network layer. Thus, the link layer is a combination of hardware and software – the place in the protocol stack where software meets hardware.