The cathode Ray Oscilloscope or mostly called as CRO is an electronic device used for giving the visual indication of a signal waveform.

It is an extremely useful and the most versatile instrument in the electronic industry.

CRO is widely used for trouble shooting radio and television receivers as well as for laboratory research and design.

Using a CRO , the wave shapes of alternating currents and voltages can be studied.  It can also be used for measuring voltage, current, power, frequency and phase shift. Different types of oscilloscopes are available in the market for various purposes.

The figure below shows the block diagram of a general purpose CRO . 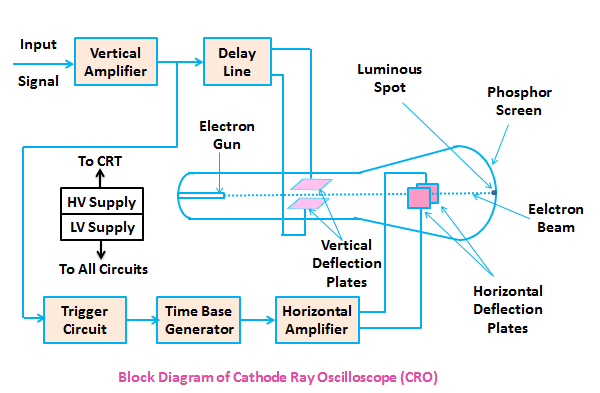 As we can see from the above figure above, a CRO employs a cathode ray tube ( CRT) ,which acts as the heart of the oscilloscope.

For accomplishing these tasks various electrical signals and voltages are needed, which are provided by the power supply circuit of the oscilloscope.

Horizontal and vertical deflection plates are fitted between the electron gun and the screen so that these can deflect the  beam according to the input signal.

To deflect the electron beam on the screen in horizontal direction i.e. X-axis with constant time dependent rate, a time base generator is provided in the oscilloscope.

As the electron beam is deflected in X-axis as well as Y-axis, a triggering circuit is provided for synchronizing these two types of deflections so that horizontal deflection starts at the same point of the input vertical signal each time it sweeps.

Since CRT is the heart of the oscilloscope, we are going to discuss its various components in detail.

The cathode ray tube or CRT is a vacuum tube of special geometrical shape which converts an electrical signal into a visual one.

A CRT makes available a large number of electrons which are accelerated to high velocity and are brought to focus on a fluorescent screen where it produces a spot when strikes it. The electron beam is deflected during its journey in response to the applied electrical signal.  As a result, the electrical signal waveform is displayed  visually.

The figure below shows various parts of a cathode ray tube (CRT) .

Now we will discuss each part of the CRT in detail.

It is a conical highly evacuated glass housing which maintains vacuum inside it  and supports various electrodes.

The inner wall of CRT between the neck and screen are usually coated with a conducting material known as aquadag. This coating is electrically connected to the accelerating anode so that the electrons which accidentally strike the walls are returned to the anode.  This prevents the walls from charging to a high negative potential.

The electron gun assembly consists of an indirectly heated cathode, a control grid, a focussing anode and an accelerating anode and it is used to produce a focused beam of electrons.

The cathode consists of a nickel cylinder coated with oxide coating and provides a large number of electrons.

The control grid encloses the cathode and consists of a metal cylinder with a tiny circular opening to keep the electron beam small.

By controlling the positive potential on it,the focusing anode focuses the electron beam into a sharp pin point.

Due to the positive potential of about 10,000 V on the accelerating anode which is much larger than on the focusing diode,  the electron beam is accelerated to a high velocity.

In this way, the electron gun assembly forms a narrow, accelerated electron beam which produces a spot of light when it strikes the screen.

It consists of two sets of deflecting plates within the tube beyond the accelerating anode and is used for the deflection of the beam.

The vertical deflection plates are mounted horizontally in the tube. On application of proper potential to these plates, the electron beam can be made to move up and down vertically on the screen.

The horizontal deflection plates  are mounted vertically in the tube. On application of proper potential to these plates, the electron beam can be made to move right and left horizontally on the screen.

The screen is coated with some fluorescent materials such as zinc orthosilicate, zinc oxide etc and is the inside face of the tube.

When high velocity electron beam strikes the screen, a spot of light appears at the point of impact. The colour of the spot depends upon the nature of fluorescent material.

As the cathode is heated, it produces a large number of electrons.

These electrons pass through the control grid on their way to the screen.

Therefore, the intensity of the light spot on the screen can be controlled by changing the negative potential on the control grid.

After leaving the control grid, the electron beam comes under the influence of focusing and accelerating anodes.

Since, the two anodes are at high positive potential, therefore, they produce a field which acts as electrostatic lens to converge the electron beam at a point on the screen.

After leaving the accelerating anode, the electron beam comes under the influence of vertical and horizontal deflection plates.

When no voltage is applied to these deflection plates, the electron beam produces a spot of light at the centre as shown by  point O in fig below on the screen. 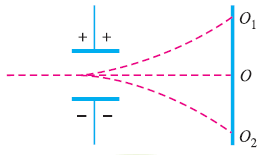 Similarly, the spot of light can be deflected horizontally by applying voltage across the horizontal deflection plates.