In our previous article we discussed the J-K flip-flop in detail.

In this article we will study some of the basic applications of the J-K flip-flop.  This will include the characteristics of the Toggle (T) flip-flop and the Delay (D) flip-flop connections of J-K flip-flops, which we have already studied in our previous article (Flip-flop conversion) .

This means that a  n-bit register will consist of n number of flip-flops and it is capable of storing an n-bit word.

Let’s take an example of a 3-bit  register . This register can be designed by cascading three D-flip-flops as shown in fig.1 .

As shown in fig. 1 , the three bits of information ( B3, B2 and B1 ) can be stored in the three D-flip-flops, thus forminf a 3-bit register. This is also called  as 3-bit buffer register .

The binary data stored in the register can be moved within the register from one flip-flop to another  upon the  application of clock pulses. Such  register which allows data transfers is called shift register .

Depending on the mode of data-shift, there are four mode of operation of  a shift register , such as :

Further depending on the direction of data movement they can be either left-shift and/or right-shift in nature .

Note : (You can have a detailed study of shift registers here .)

Counter is a  digital circuit used for a counting pulses or number of events and  it is the widest application of flip-flops .

A Counter consists of a series of flip-flops (JK or D or T) arranged in a definite manner . A single flip-flop has two states 0 and 1, which means that it can count upto two.Thus one flip-flop forms a 2-bit (or Modulo 2, MOD 2) counter.

Counters are broadly classified in to two types based on the clock pulse input,as

These counters can further be classified as  positive or negative edge-triggered depending on the connections provided at their clock inputs.

Moreover by slightly modifying the connections between the flip-flops, various other kinds of counters can be designed such as , up-counter, down-counter, up/down counter, ring counter, johnson counter, etc.

An Event detectors is a  circuit which is capable of  determining the occurrence of a particular event.

These detectors  change their state when an event occurs and retain in the same state till that event gets cleared .

Flip-flops are well-known to preserve their state until the appearance of a suitable condition at their inputs, which means they can act as event detectors.

For example, door sensors on a home burglar alarm system use an event detector circuit. Once someone opens the door, the alarm will sound until the system is turned off.

In a particular combinational circuit all the outputs are  expected to change their states at the same instant.

However sometimes due to the varying gate delays, the outputs of the combinational circuit might change their states at different instants of time  as shown by the green lines in Figure 4(a) . 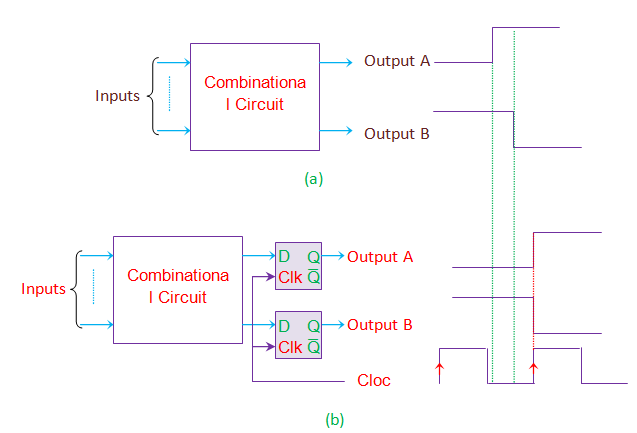 This would further cause unexpected behavior resulting in wrong outputs.

This can be avoided by using synchronous D flip-flops at the outputs acting as data synchronizers .

In this case, the outputs will be latched by the flip-flops until the clock signal appears. This is shown in fig. 4 (b) .

Thus the outputs can change their states only when the positive edge of the clock triggers the flip-flops which in turn causes the state-change in all the outputs at that particular instant of time.

Let’s consider a positive edge triggered JK flip-flop whose inputs are tied-together and driven high, as shown in Figure 5.

In this state, the output of JK Flipflop will toggle for each positive-edge of the clock signal (red lines in the figure).

From the waveform it is clear that if the input clock period is Tin, then the time period of output waveform Tout is twice of it.

This implies that input frequency is divided by 2.

In other words, after passing through a single flip-flop, the input frequency will be halved.

On the same grounds one can conclude that after passing through the n flip-flops, the input frequency will be divided by 2n which results in