As we have already discussed in our previous tutorial, in case of a RC coupled transistor amplifier the voltage and power gain are low since, the effective load resistance of each stage is decreased due to the low resistance presented by the input of each stage to the next stage.

If the effective load resistance of each stage could be increased, the voltage and power gain could also be increased.

This can be achieved by transformer coupling. By using the impedance matching properties of transformer, the low resistance of one stage or load can be reflected as a high load resistance to the previous stage.

Transformer coupling is normally used when the load is small. It is mostly used for power amplification.

The figure below shows the circuit of a two stage transformer coupled amplifier.

As you can see from the above fig. a coupling transformer is used to feed the output of one stage to the input of the next stage.

The primary P of this transformer is made the collector load and its secondary S supplies input to the next stage.

When an a.c. signal is applied to the base of first transistor, it appears in the amplified form across the primary P of the coupling transformer.

Now the voltage developed across P is transferred to the input of the next stage by the transformer secondary S.

The second stage now performs the amplification in an exactly same manner.

The frequency response of a transformer coupled amplifier is shown in the figure below. 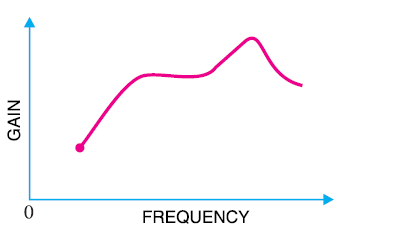 It is clear from the above fig. that its frequency response is poor than the RC coupled amplifier.

The gain is constant only over a small range of frequency.

At high frequencies, the capacitance between turns of windings acts as a bypass condenser to reduce the output voltage and hence the gain.

Due to these two factors, there will be disproportionate amplification of frequencies in a complete signal such as music, speech etc.

It is mostly used for impedance matching.

Normally the last stage of a multi stage amplifier is the power stage. Here it is required to transfer maximum power to the output device for example a loud speaker.

Usually the impedance of an output device is few ohms whereas the output impedance of the transistor is several hundred ohms.