Due to its low cost and excellent audio fidelity over a wide range of frequencies, an RC Coupled Amplifier is the most popular type of coupling used in a multi stage amplifier.

It is usually used for voltage amplification.

The figure below shows two stages of an RC coupled amplifier.

As you can see in the fig above, a coupling capacitor CC is used to connect the output of first stage to the base i.e. input of the second stage and this continues when more stages are connected.

Since here the coupling from one stage to next is achieved by a coupling capacitor followed by a connection to a shunt resistor, therefore, such amplifiers are known as resistance-capacitance coupled amplifier or simply RC coupled amplifier.

The resistances R1, R2 and RE form the biasing and stabilisation network.

The emitter bypass capacitor offers a low resistance path to the signal. Without this capacitor the voltage gain of each stage would be lost.

The coupling capacitor CC  transmits a.c. signal but blocks d.c. This prevents d.c. interference between various stages and the shifting of operating point.

When a.c. signal is applied to the base of the first transistor, it is amplified and appears across its collector load RC.

Now the amplified signal developed across RC is given to the base of the next transistor through a coupling capacitor CC .

In this way the cascaded stages amplify the signal and the overall gain is considerably increased.

However, the total gain is less than the product of the gains of individual stages. It is because, when a second stage follows the first stage, the effective load resistance of first stage is reduced due to the shunting effect of the input resistance of second stage. This reduces the gain of the stage which is loaded by the next stage.

To explain it better, let us take an example of  3-stage amplifier. The gain of first and second stage will be reduced due to loading effect of the next stage. But the gain of the third stage which has no loading effect due to subsequent stage, remains unchanged.

The overall gain is equal to the product of the gains of three stages.

The figure below shows the frequency response of a typical RC coupled amplifier. 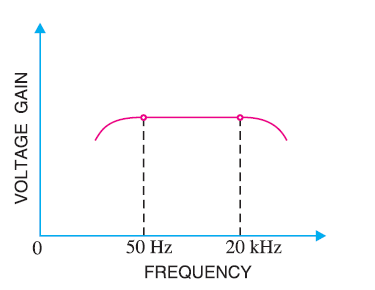 This behaviour of the amplifier can be explained as follows :

(i) At Low Frequencies

At low frequencies i.e. below 50 Hz, the reactance of coupling capacitor CC is quite high and hence very small part of the signal will pass from one stage to the next stage.

Again CE can not shunt the emitter resistance RE effectively because of its large reactance at low frequencies.

These two factors cause the dropping of voltage gain at low frequencies.

At high frequencies i.e. above 20 KHz, the reactance of  coupling capacitor CC is quite small and hence it behaves as a short circuit. This increases the loading effect of next stage and results in decreased voltage gain.

Again at high frequencies, capacitive reactance of base-emitter junction is low which in result increases the base current. This causes decrease in current amplification factor β.

These two factors cause the dropping of voltage gain at high frequencies.

At mid frequencies i.e. between 50 Hz to 20 KHz , the voltage gain of teh ampifier is constant.

The effect of coupling capacitor in this frequency range is such that the voltage gain remains uniform.

As the frequency increases in this range, reactance of CC decreases which in result increases the gain. However, at the same time lower reactance means higher loading effect of first stage to the next one and hence gain decreases.

Thus, these two factor almost cancel each other, resulting in an uniform gain at this mid frequency.

Used as voltage amplifiers for example in the initial stages of public address system.

If other type of coupling such as transformer coupling is used in the initial stages, this results in frequency distortion which may be amplified in the next stage.

But, due to its poor impedance matching, it is rarely used in the final stages.